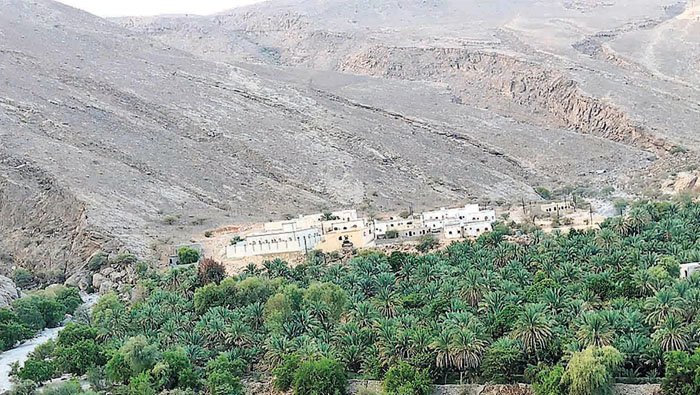 Sur: There are a number of beautiful mountainous areas and villages in the Wilayat of Sur in the Governorate of South A’Sharqiyah.
These areas and villages have tourist potentials, such as mountains, valleys, agricultural areas and various archeological sites, which attract tourists.
The village of ‘Abat’ is one of these mountainous village and the largest village in Wadi Al Minqal, in terms of area and population.
It is located in the far west of this Wadi, and bordered to the north by the slopes ‘A’ant’ mountain, to the south the village of ‘Tema’, to the east by the village of ‘Hawajir’ and to the west by the Al Hajar Al Gharbi Mountains.
The Village of ‘Abat’ is about 48 kilometers from the centre of the Wilaya.
The village can be reached through the main street from the Wilayat of Sur to the Wilayat of Al Kamil Wa Al Wafi. The visitors should take the left turn at Al Fleij area, and then take the mountain road for 20 kilometers.
Mohammed bin Rashid Al Alawi, Sheikh of the village said, “The village of ‘Abat’ is located in the middle of Wadi Al Minqal.”
He added: “The village climate is warm in the winter and hot in summer, the villagers use (Abu Talqa) Falaj water irrigate their plantations.”
Yousef bin Khamis Al Dawoodi, a villager from ‘Abat’ said, “The majority of the villagers like other villages in the valley rely on their economic activity on agriculture and textile industry, which is still practiced to this time.
“When on enters the village, he can hear the sound of the textile machine, in addition to frond industries and cattle breeding.”
The village is famous for growing different varieties of date palm trees, such as Al Barni, Al Madlooki, Al Naghal, and Abo Narinja, as well as mango, banana, lemon, orange and sour orange.
He added “There are many historical landmarks in the village, most notably ‘Al Nimer’ Tower, ‘Harat Al Hisn’ Tower, ‘Al Wadi’ Tower and ‘Harat Al Ruqa’a’ Tower, as well as ‘Al Beer’ Castle, which has a private residence for its guards, a water storage basin and an old mosque.
There is also the old Castle, on top of the mountain, which was used in the past as a guarding site, with remains of horse stable.
There are some remains of old houses that are not used now as they need to be developed to turn into a tourist site.