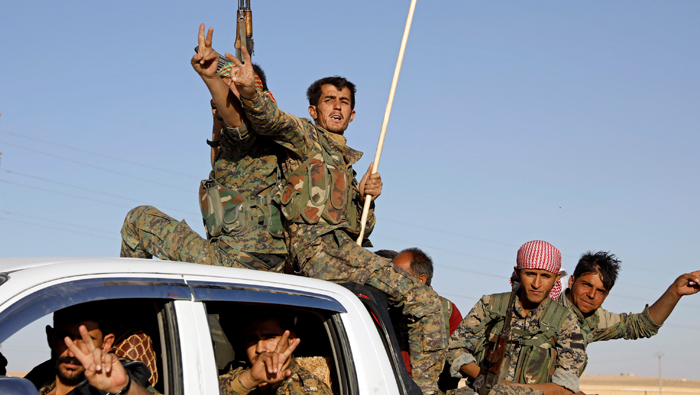 Amuda(Syria): A deal between Damascus and Syria’s Kurds over their autonomous region in the country’s north is “inevitable”, a senior Kurdish military official said on Saturday, insisting that Kurdish forces should remain in the area.
Marginalised for decades, Syria’s minority Kurds carved out a de facto autonomous region across some 30 per cent of the nation’s territory after the devastating war broke out in 2011.
Kurdish forces, backed by a US-led coalition, spearheaded the fight in Syria against the IS group after the extremists seized large parts of the country and neighbouring Iraq in 2014.
But Washington’s shock December announcement that it would withdraw its troops from Syria pushed the Kurds to seek a new alliance with President Bashar Al Assad’s regime, amid fears of a long-expected Turkish assault against Kurdish forces.
Redur Khalil, a commander in the Kurdish-led Syrian Democratic Forces alliance, said that Kurdish authorities and Damascus were bound to reach a deal.
“Reaching a solution between the autonomous administration and the Syrian government is inevitable because our areas are part of Syria,” said Khalil.
Syrian government forces deployed late last month around the key city of Manbij in Aleppo province, after Kurdish forces called for them to arrive.
“Negotiations are ongoing with the government to reach a final formulation for administering the city of Manbij,” Khalil said, adding that talks had shown “positive signs”.
If that leads to a solution that “protects the rights” of Manbij residents, a similar arrangement could be applied to SDF-controlled areas of Deir Ezzor province, east of the Euphrates river, he said.
The deployment of government forces along the Turkish border could not be ruled out, he added.
Ankara views the SDF’s Kurdish fighters as “terrorists”, in cahoots with the outlawed Kurdistan Workers Party (PKK), which has been fighting Turkish troops since 1984.
“We still have some differences with the central government, which need negotiations with international support,” Khalil said, adding that regime backer Russia could act as a guarantor state.
Outstanding issues include the form of government in Kurdish regions and the future of Kurdish forces stationed there, he said.
“The tasks of these forces could change, but we will not withdraw from our territory,” Khalil said, adding Kurdish fighters could be integrated into the Syrian army.
He also called for a new constitution that would guarantee Kurdish rights.
Sparked by the brutal repression of anti-Assad protests in 2011, Syria’s multi-fronted conflict has killed more than 360,000 people and displaced millions at home and abroad.