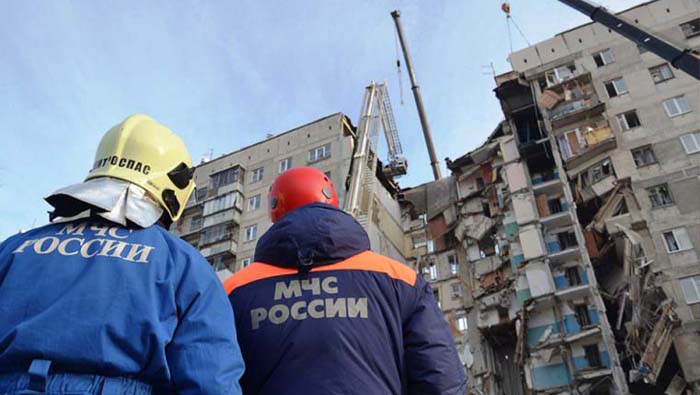 Moscow: Rescuers hunted for survivors Wednesday in the rubble of a Russian apartment building wrecked by a New Year's Eve gas explosion, but found only bodies as the number of confirmed dead rose to 22.
Nineteen people were still missing following the explosion, which destroyed 35 apartments in the Ural mountains city of Magnitogorsk.
Braving temperatures as low as minus 27 degrees Celsius (minus 16 degrees Fahrenheit), rescue workers were combing through mangled concrete and metal.
Their efforts were given a boost on Tuesday when a 10-month-old boy was found alive and reunited with his mother. But hope was starting to fade of finding more survivors.
The emergency situations ministry said in a statement that as of 1445 GMT the bodies of 22 people, including two children, had been recovered from the partly collapsed building. Six people, including two children, had been rescued.
"Work is continuing 24 hours a day" the ministry said, noting that 800 square metres of debris -- loaded into 50 dump trucks -- had been cleared from the site in the last 24 hours.
The explosion tore through the 10-storey building in the industrial town nearly 1,700 kilometres (1,050 miles) east of Moscow in the early hours of Monday.
Witnesses described a "wave of fire" and said the blast was strong enough to shatter windows in nearby buildings.
The Soviet-era apartment block was home to about 1,100 people and the explosion left dozens homeless over the New Year -- the biggest holiday of the year in Russia.
Tuesday's recovery of the infant offered a rare moment of hope, with officials describing his rescue as a "New Year's miracle".The boy was found in his cradle after rescuers heard him crying from under the rubble.
He was brought to his mother, who had survived the blast, and then flown to Moscow for treatment.
Russian television showed footage of the boy lying in a hospital bed watched by his tearful mother.
Medical officials in Moscow said he was in serious but stable condition after suffering from severe frostbite, a head injury and multiple fractures.
Residents left homeless by the explosion were being housed in a nearby school and helped by a team of psychologists.
Wednesday was a day of mourning in the region, with flags lowered and entertainment events cancelled, in a country where New Year's celebrations are an annual highlight. Mourners laid flowers and lit candles near the site of the building.
"We are all grieving," a middle-aged man told Rossiya 24 television."Nearly everyone in the city knew someone" caught up in the accident.
City officials said funerals would start being held from Friday.
Families of the victims would receive financial assistance to pay for funerals and additional help of 50,000 rubles ($720, 630 euros) for those injured and twice that amount for those killed. Investigators have said there is no reason to suspect foul play.
Rumours have swirled on social media of a possible terror link, especially after a minibus explosion in Magnitogorsk on Tuesday that killed three people.
"No traces of explosives or their components have been found" at the scene, the federal Investigative Committee said in a statement.
Local authorities have said the minibus explosion was the result of leaking gas tanks and that there was no link between the two blasts.
Gas explosions are relatively common in Russia, where much of the infrastructure dates back to the Soviet era and safety requirements are often ignored. Investigative Committee chief Alexander Bastrykin told Russian television that gas equipment in the Magnitogorsk building had not been checked for more than six months prior to the explosion.
Located in the mineral-rich southern Urals, Magnitogorsk, with a population of more than 400,000, is home to one of Russia's largest steel producers.