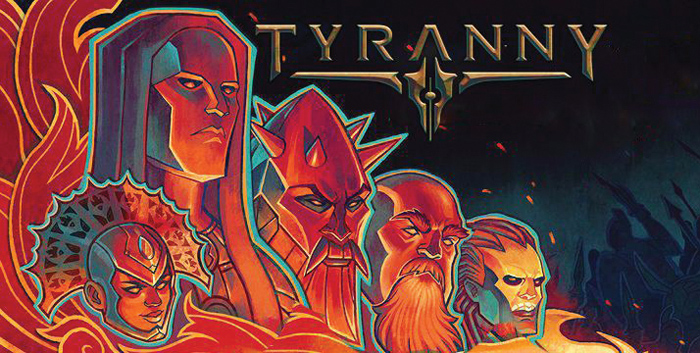 Picture this. Your master is the most powerful being that ever lived. He’s not gotten there by being nice or kind; he’s the big kahuna because he rules through fear and intimidation.
He raises vast armies from among those who serve him, making even their proudest chiefs bow to him in servitude, and without a second thought, unleashes his forces on lands that are foolish enough to resist him, or in this case, her. You are the one leading those forces, and your word is law.
Welcome to the world of Tyranny, a role-playing game where good choices are punished and bad ones are rewarded. Created by Obsidian Entertainment and Paradox Interactive, Tyranny is a fantasy game that takes place in a world where the Overlord Kyros rules with an iron fist.
Through her generals – named Archons in game – she continues to feed her hunger for power and domination, and employs a group of men and women named Fatebinders to ensure her laws are obeyed without question, and those who do doubt her will are ruthlessly put down without question.
You are the latest Fatebinder to enter Kyros’ thrall, armed with the power of life and death. It’s not just innocent villagers and hapless townsfolk who quiver in your presence, but Kyros’ own minions, be it soldiers or servants, who watch your approach with fear. When a Fatebinder arrives to dispense justice, it is because Kyros’ armies have failed to do their duty and enforce the overlord’s will.
Tyranny is set in the realm of Teratus, a land of might and magic which is set in the transitory period between the Bronze and Iron Ages. Having conquered all of the known world, Kyros’ banners now flutter in the direction of the Tiers, a last holdout of rebels who refuse to bow to her might. Having laid siege and occupied the border towns, where Tunon the Adjudicator, the Archon of Justice, holds court in Kyros’ name, you are tasked with bringing the rest of the Tiers to heel...a task far easier said than done.
Two of Kyros’ armies have been sent to subdue the Tiers. The elite Disfavored are her iron legions, having never faced defeat in the field, and adhering to the code of the warrior. They fight with honour, and respect their enemies. To meet the Disfavored in open war is to risk certain death. Led by Graven Ashe, the Archon of War, the Disfavored are a band of soldiers who fight for each other and respect their leader.
Then there’s the Scarlet Chorus, a ragtag force of yelling, screeching fighters who take pleasure in slaughtering their enemies. To them, war is not a duty, but a dance. Led by the Voices of Nerat, who command through secrecy and deceit, the Scarlet Chorus gives their captives two simple choices — serve or die.
But why have two of Kyros’ most feared armies descended on the Tiers? Three years after its initial invasion, the Vendrien Guard, a group of warriors loyal to house Vendrien, decided to continue their war against Kyros, in the hope that their guerrilla war would inspire others to take up arms against them.
But complete and utter victory is not all that spurs the Disfavored and Scarlet Chorus to eliminate the Vendrien Guard. Kyros is not pleased with the manner in which the two armies have been trying to outdo each other, spending more time bickering and placing the blame at the tents of their commanders, than actually getting anything done. The Overlord has sent you to get the job done. Otherwise, she will unleash one of her Edicts, spells of power that destroy all in their path, sparing no mercy for either friend or foe.
It is your job to get this done, no matter the cost, or Kyros will take things into her own hands, once again paying tribute to that old saying, “If you want something done right, do it yourself.”
Made by the same team that made Star Wars: Knights of the Old Republic, Neverwinter Nights 2, Alpha Protocol, Fallout: New Vegas, Dungeon Siege III, South Park the Stick of Truth and Pillars of Eternity, Tyranny features some stunning landscapes, great voice acting and fun gameplay. A game worthy of your time this weekend and many others.
– [email protected]

The Short and Skinny
Name: Tyranny
Genre: Fantasy RPG
Produced by: Paradox Interactive and Obsidian Entertainment
What it’s about: In a world ruled by fear and chaos, Kyros the Overlord’s word is law. You are among those chosen to serve her and enact her will. Will you bow to her commands, or seek your own way?
Where to buy: Steam Store, Paradox Plaza, GOG Games, Amazon.com, Apple Store, Humble Bundle
Platforms: PC, Mac OSX, Linux
IGN Rating: 8.3/10