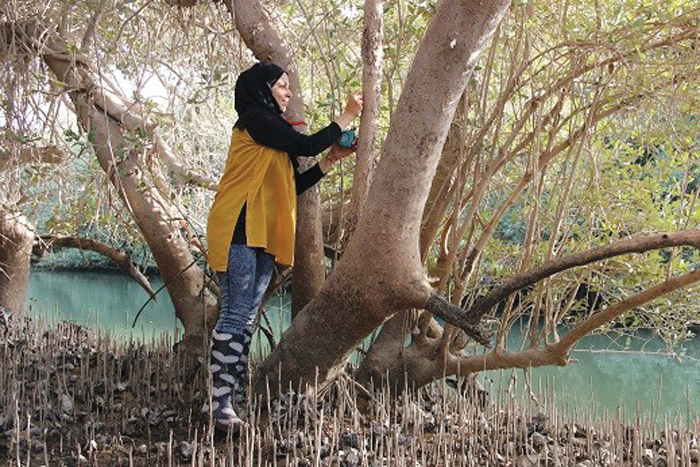 Muscat: An Omani researcher in the UK has published her PhD on the country’s mangroves, in the hope that they can be used to mitigate the harmful effects of climate change.
Zakiya Al Afifi, who is currently doing her PhD in environmental sciences from the University of York in the United Kingdom, is studying the role of nature and man coexisting alongside each other, and hopes to share her work with the authorities so they can use it to benefit the country.
“Primarily a coastal tree, mangroves have several benefits to the environment, such as coastal erosion prevention and mitigating the effects of wave and storm energy,” said Al Afifi, speaking to the Times of Oman. “They also host species of both ecological and subsistence importance, for example in the case of fish.”
“The research centred around identifying and highlighting the contribution of Al-Qurum and Quriyat mangroves to community well-being,” she added. “It also aimed at identifying the drivers of environmental change affecting these mangrove ecosystems such as storms and urbanisation, and providing recommendations for the sustainable management of mangrove forests at the national level in Oman.”
**media[986396]**
Al Afifi said that planting mangroves could definitely help in environmental conservation, adding that her research took place over four years, and was funded by the government of Oman. In conducting her research, Al Afifi spoke to those who tended the trees and the locals in the surrounding areas, apart from conducting physical studies of the mangrove trees to analyse how they benefited the communities around them.
She previously worked as a lecturer in the Environmental Sciences section of the Applied Sciences Department at the Higher College of Technology, after graduating in environmental biology from Sultan Qaboos University and securing an MSc in environment and sustainable development from the University of Leeds.
“The research used different methodological approaches including self-administered questionnaires and semi-structured interviews with locals,” she said. “It also used the participatory mapping of public knowledge and opinions and field-based surveying of mangrove trees as well. Different ecosystems play different roles in the wellbeing of humans. In order to value the services and benefits we get from ecosystems we need to examine them, which will also help shape the management strategies of the ecosystems.”
“The approaches applied by decision makers should aim to bridge the gap between politics, science and communities,” added Al Afifi. “Planting mangroves can absolutely help environmental conservation, but strategies will vary according to the reasons behind the planting of mangroves. Is it to increase the potential of sequestering more carbon? Is it to provide habitats for species such as fish and birds? Is it to enhance our engagement with nature and enrich the spiritual experience?”
“Ultimately, all these factors influence which location should be chosen and which species of seedlings should be planted,” she said.
Unbeknown to some, mangrove trees have been present in the Middle East for more than 6,000 years, and help create an ecosystem that enables nature to thrive. Several conservation projects are currently in place in Oman, as well as the other GCC countries. Having worked on the mangroves for so long, Al Afifi asked people to respect the trees, because there might be some who don’t.
**media[986397]**
“Our wellbeing is linked both directly and indirectly to our environment,” she said. “We should respect the environment because it is also highly valued from a religious and cultural point of view. Mangroves exist in all the GCC countries, but Oman is known for being the centre of mangrove conservation in the Arabian Peninsula and archaeologists have shown that mangroves secured their existence in the region more than 6000 years ago, despite the arid climate of Oman.”
While at the University of York, Al Afifi worked with Dr Bryce Stewart, a professor at the university and specialist in eco and marine conservation practices. He too was happy to see her display a passion to secure her country’s natural wealth for the future.
“It has been an absolute pleasure to supervise Zakiya and I am delighted with the PhD thesis she has produced,” he told Times of Oman. “A key strength of her work is that she has assessed and quantified many different benefits that mangroves provide the people of Oman.”
“This includes everything from storm protection and carbon sequestration to fisheries provision and the enhancement of human wellbeing,” added Stewart. “I have no doubt her work will play a valuable role in helping ensure a sustainable future for the mangroves of Oman.”