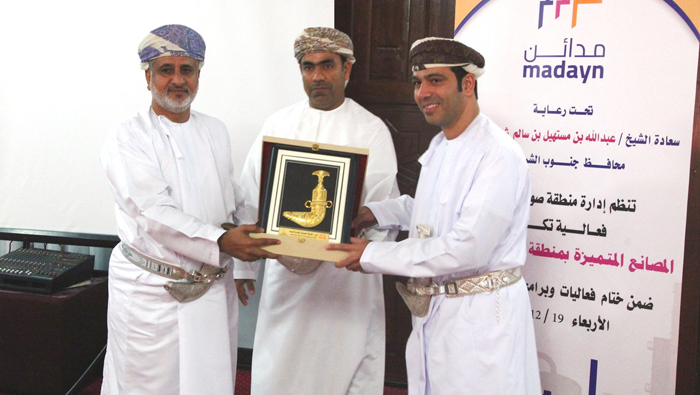 Muscat: The total volume of investments at Sur Industrial Estate surpassed OMR2.03 billion at the end of the first half compared with OMR2.02 billion in 2017, according to Eng. Abdullah Al Kaabi, Director General of Sur Industrial Estate.
Additionally, the number of projects being operated in the estate touched 145 at the end of this year’s first half compared to 135 in 2017, Al Kaabi said.
Al Kaabi was giving a brief on the latest developments at the estate and upcoming infrastructure projects, the newly launched brand of the Public Establishment for Industrial Estates (Madayn), and the new investment regulations.
He said that an increase was seen in the estate’s workforce number and touched 4,074 at the end of the third quarter of 2018 compared to 3,863 employees during the same period in 2017, with an Omanisation rate of around 51 per cent.
He confirmed that the completion rate at the project of developing consultancy services for the estate’s infrastructure – first phase —has touched up to 40 per cent.
An agreement was signed for the location of the investment window (Masar) at City Walk 3, and the tender for the implementation has been floated, he added. It should be noted that Masar aims at integrating the services provided by Madayn to investors directly, as well as services provided by other government bodies through one governmental platform for data exchange and completion of procedures.
Masar endeavours to provide a flexible, easy and transparent interaction between the business community and the government, besides providing a reliable and secure environment for companies to conduct day-to-day transactions with the bodies concerned.
Sur Industrial Estate, which pertains to the Public Establishment for Industrial Estates (Madayn), on Wednesday, honoured the estate’s small and medium, and large-scale industries that excelled in 2018 under the auspices of Sheikh Abdullah bin Mustahil bin Salim Shammas, Governor of South Al Sharqiyah Governorate. The event was held in the presence of Madayn’s CEO Hilal bin Hamad Al Hasani and a number of investors and business owners in the estate.
The event’s chief guest stressed on the key role played by Madayn in supporting and advancing the national economy in line with the Sultanate’s current and future strategies.
“Madayn, represented by Sur Industrial Estate, is of great importance to South Al Sharqiyah Governorate through boosting the investment movement, providing job opportunities, in addition to the various value added services offered by Madayn through its investment arm – Shumookh Investment and Services SAOC – for citizens and residents in the estate, such as commercial centres and entertaining facilities,” said Sheikh Abdullah bin Mustahil bin Salim Shammas.
Innovative marketing
A session was held on the sidelines of the event on innovative marketing strategies, which was delivered by Dr Mohamed Al Araimi, Institute of Public Administration. The session aimed at disseminating awareness on the strategies and plans that play a role in ensuring the enhancement of targeted profit and sustainability of success and competitiveness. “Innovative marketing is presenting marketing activities in an innovative framework that contribute to the effectiveness of the marketing process through implementing new and unusual ideas to increase the market share of the company,” Al Araimi stated.
The factories were then honoured in two categories. The first category was dedicated to the estate’s large-scale industries, while the second was dedicated to the small and medium enterprises at Sur Industrial Estate. Oman India Fertiliser Company received the shield of excellence for the first category. Receiving the shields of excellence for the second category were Sur National for Mineral Water Company, Rashid and Mohamed Trading Co., Sea Pride, Dhabian Sur Trading, Shanfari Readymix and Crushers and Al Mradim Trading.