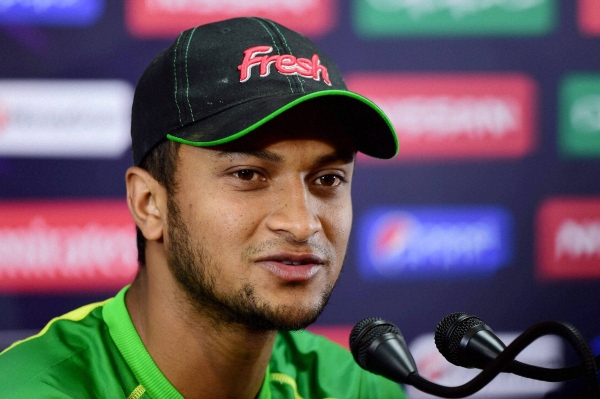 Dhaka, Bangladesh: Bangladesh captain Shakib Al Hasan was fined 15 percent of his match fee for shouting at the umpire during Monday's opening Twenty20 international against West Indies, the International Cricket Council said.
Shakib was also handed one demerit point, his second such penalty since the introduction of the system in September 2016, for the offence during hosts' eight-wicket defeat.
Shakib now has two demerit points, having been handed one for an offence during a Twenty20 against Sri Lanka in March this year.
Shakib showed dissent while batting after the umpire did not call a wide in the 14th over of the Bangladesh innings.
"He first shouted at the umpire and then got involved in a prolonged discussion," said an ICC statement issued late Tuesday.
"After the end of the match, Shakib admitted the offence and accepted the sanction," it said, adding no formal hearing was required.
Shakib scored 61 off 43 balls in the game in Sylhet but could not prevent a humiliating loss for his side.
West Indies bowled out Bangladesh for 129 and knocked off the target with 55 balls in hand to take 1-0 lead in the three-match series.
The second and third matches will be held in Dhaka on Thursday and Saturday.
Bangladesh swept West Indies 2-0 in the preceding Test series before winning the three-match one-day international series 2-1.