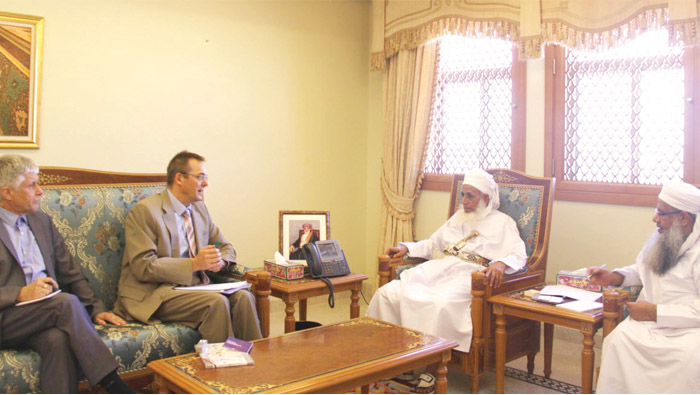 Muscat: His Eminence Sheikh Ahmed bin Hamad Al Khalili, Grand Mufti of the Sultanate received in his Office yesterday Dr. Erwin Tanner, General Secretary of the Swiss Bishops’ Conference.
The meeting exchanged conversations on the Islamic religion, peaceful coexistence and issues of common concern. The guest expressed his delight on the Sultanate’s experience in coexistence with others, besides reviewing the church’s role and the exerted effort to coexist with Muslims and other communities in Switzerland.
The Grand Mufti of the Sultanate explained to the guest that respect for the other is a genuine Islamic principle stemming from the Islamic faith.
Allah the Almighty says in the Holy Qu’ran “good words to all people”. He also stressed that fairness and justice are the basis of governance in Islam, this was not a theory but a practice in Islam, as eight versus in Islam acquitted a Jewish man, and the Sultanate is a good example of this genuine principle.
The meeting also focused on the need of inculcating values and morals among peoples of the world and combating all ideas that call for spreading dissolution among people, as well as serving humanitarian issues and securing peoples and societies against injustice, including the Palestinian people that is suffering from occupation, this in turn will lead to the prevalence of security, stability and peace amongst peoples.
It is worth mentioning that the Sultanate has a prominent role in cementing the Islamic fundamentals and promoting values of tolerance and coexistence, besides its tangible efforts in the religious field through its regional and international contributions to establishing tolerance and understanding of the other.