Putin lays out plans to develop missiles if US leaves treaty 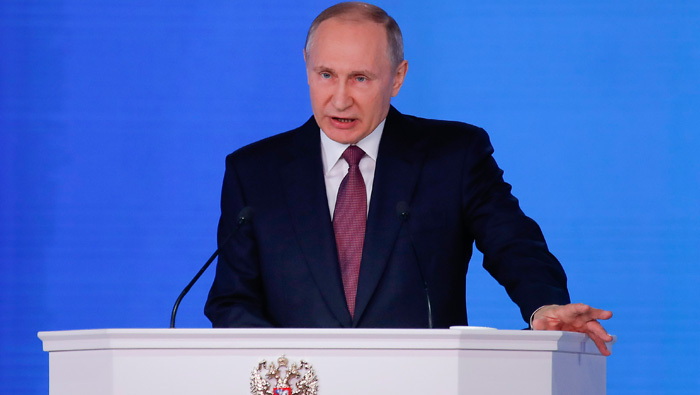 Moscow: Russian President Vladimir Putin on Tuesday laid out plans for Moscow to develop mid-range missiles banned under a Cold War treaty with the United States if Washington abandons the deal.
Tensions have raged over the fate of the Intermediate-Range Nuclear Forces treaty (INF), with US President Donald Trump promising to walk away from the agreement and Putin threatening a new arms race.
Washington this month said it would withdraw from the INF within 60 days if Russia did not dismantle missiles that the US claims breach the deal.
The bilateral agreement forbids ground-launched short- and intermediate-range missiles, but not those launched from the air or sea.
Speaking at a defence ministry meeting, Putin said Russia's seaborne Kalibr and air-launched Kh-101 cruise missiles -- as well as cutting-edge hypersonic Kinzhal (Dagger) missiles -- would be converted for ground launch if Washington ditches the INF treaty.
"It probably won't be very difficult to conduct appropriate research and development and put them on the ground if need be," he said.
Putin once again touted the Kinzhal missile, which he first unveiled as part of an array of next-generation nuclear weapons in his annual state-of-the-nation address earlier this year.
"No one else has it yet," he said.
He said the deployment of Kalibr missiles during Moscow's Syria campaign proved useful, allowing the military to fine-tune "this very promising" weapon.
Putin also suggested he was open to the idea of other countries joining the INF treaty or to starting talks on a new agreement.
Signed in 1987 by then US president Ronald Reagan and Soviet leader Mikhail Gorbachev, the treaty bans ground-launched missiles with a range of between 500 and 5,500 kilometres.
The deal resolved a crisis over Soviet nuclear-tipped ballistic missiles targeting Western capitals, but put no restrictions on other major military actors like China.
"Yes, indeed there are certain difficulties with this treaty," Putin said.
"Other countries possessing short- and intermediate-range missiles are not party to it.
"But what prevents (us) from starting talks on their accession to the existing treaty or starting negotiating the parameters of a new treaty?"
Putin has said about a dozen countries were producing missiles of the type banned by the INF treaty.
Military expert Vasily Kashin said it would be fairly easy to convert Kalibr and Kh-101 cruise missiles for ground launch, though the Kinzhal hypersonic missile would need more work.
"This is not a threat, this is what will be unavoidable if there is no treaty," Kashin said.
He said ground-based intermediate-range missiles were cheaper, so Russia could place more of them in range of European targets, but added that Moscow wanted to keep the treaty to protect itself against a possible US attack.
Defence expert Alexander Golts said he doubted it would be possible to rescue the agreement and that expecting China to join the deal was "absolutely unrealistic".
"This is 90 per cent of China's nuclear weapons capabilities," he said.
Former Cold War enemies Russia and the US have accused each other of being in breach of the agreement and Washington has said honouring it no longer made sense. Putin has said that Europe would be the main victim of a new US-Russia arms race.
The European Union has urged Russia and the US to save the deal.
A 60-day grace period -- granted by the US as a concession to European partners -- on the issue will expire in mid-February.