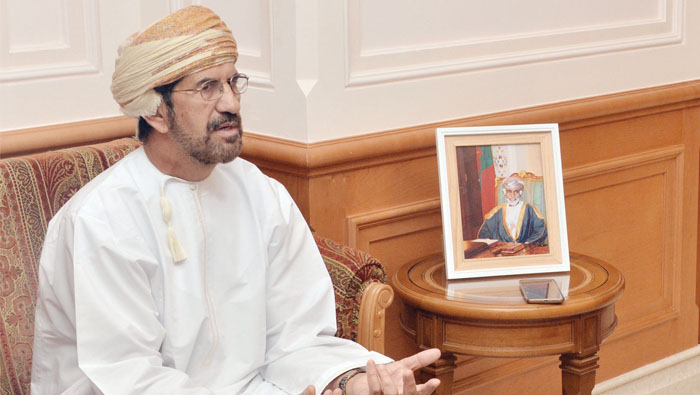 Muscat: Sheikh Ali bin Nasser Al Mahrouqi, Secretary-General of Majlis Al Shura, hailed His Majesty Sultan Qaboos bin Said’s interest and continuous care to Shura march in the Sultanate, which led to its maturity and development.
He said that the good turnout and the great success witnessed by the previous elections for the current term resulted in the emergence of a group of members, mostly youth, with graduate and postgraduate degrees, whose homogeneity contributed to the active leadership in activating the functions and competences of Majlis Al Shura in various fields and at various levels.
The Secretary-General of Majlis Al Shura said that during this period the Majlis has studied 18 laws, 39 agreements submitted by the government, submitted 6 draft laws and 19 studies and requests, and discussed 14 ministerial statements.
He pointed out, “During this term, the use of monitoring means and tools has doubled. Parliamentary questions directed at the government reached more than 400 questions. During the first three sessions of this period, 121 requests were submitted more than three times the seventh period. Seventy-four meetings of the Majlis and 342 meetings of specialised committees,” indicating the volume of work and efforts exerted by Majlis Al Shura and its members in order to exercise the legislative, financial and supervisory powers stipulated in the Basic Law of the State, amended by Royal Decree No. 99/2011, which created a real partnership with the government.
With regard to the joint sessions between Majlis Al Shura and the State Council, the Secretary-General of Majlis Al Shura praised the tangible role and cooperation between the two councils and reflected positively on mutual understanding and cooperation, saying that the joint meetings are a translation of the provisions of the Basic Law of the State and the vision of His Majesty the Sultan and activate the joint coordination between the State Council and Majlis Al Shura under the umbrella of the Council of Oman.
On the participation of Majlis Al Shura in preparing the future vision, “Oman 2040”, he pointed out that the Majlis participated actively in all the sectoral laboratories of “Tanfeedh Programme’’, which presented many opinions and proposals, considering that the importance of the participation of the Majlis lies in the formulation of the vision that represents the citizen’s point of view, as the members of the Majlis are the link between citizen and government.
He stressed that the cooperation between the government and the Majlis Al Shura exists in many areas of interest to the homeland and the citizen. The Majlis, after discussing the draft budget, submits its recommendations and views on it in all transparency and clarity.
He added that the Council of Ministers responds annually to the State Council and Majlis Al Shura, about their recommendations that were not taken into consideration on the draft general budget of the State with reasons. The Majlis has several channels of communication with the Council of Ministers from a semi-annual meeting with it, a meeting of Majlis Al Shura’s Office with Sayyid Fahd bin Mahmoud Al Said, Deputy Prime Minister for the Council of Ministers and also meetings with the ministerial coordinating committee formed by the Minister of Legal Affairs whose tasks are to overcome the difficulties and find solutions for the reasons that warrant this, and there is an open meeting with the whole cabinet in free meetings aimed at exchanging views and direct and continuous communication with the Secretariat of the Council of Ministers. On the local role of Majlis Al Shura, he said, “Majlis Al Shura is now one of the references in the public affairs regarding the affairs of citizens through the partnership between the Majlis and the citizens through social media or the presence of citizens in the meetings of the Majlis. The Majlis also adopted the principle of participation through the “Shura Dialogue”, where the specialized committees invite competent citizens to take their views in relation to studies.”
Sheikh Ali bin Nasser Al Mahrouqi, Secretary-General of Majlis Al Shura, concluded by saying that Majlis Al Shura has become a member and has a prominent presence in the regional and international councils. It also has representation in more than 29 committees of friendship at the regional and international levels.