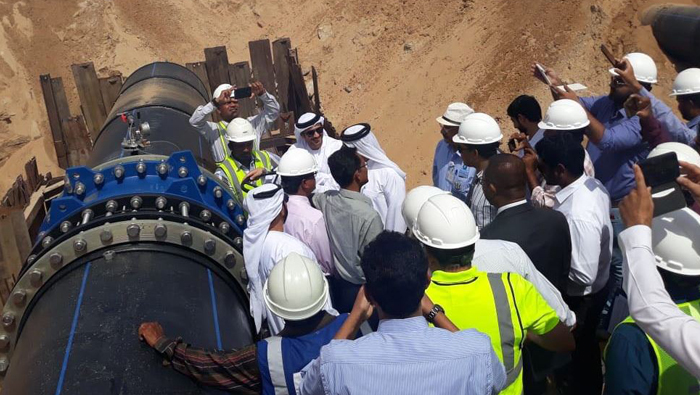 Muscat: The UAE’s leading private utility company, Utico, said it has commissioned the largest sustainable trans-Emirate pipeline in the UAE, built at a cost of over US$100 million.
The pipeline which connects Ras AlKhaimah, Um Al Qwain, Sharjah and Ajman is now operational supplying water to customers including Sharjah Electricity and Water Authority (SEWA) and through its connected network to Federal Electricity & Water Authority (FEWA), Utico said in a statement.
“The pipeline can be used to pump at both ends or connect in between enabling each Emirate to trade water. It also facilitates instant water supply to each Emirate when connected. The investment in the pipeline was only possible due to the firm belief in the future of the UAE as a country of opportunities and in its dynamic visionary leadership,” said Richard Menezes, CEO of Utico.
He said it is the first such pipeline of this size and design built with complete PE 100 HDPE making it the most efficient and hence with total lower energy costs.
Utico owns over 76 million gallons per day (MIGD) of desalination capacity including 40MIGD under construction due for commissioning in 2019/2020, thus making it the first private utility to invest in this capital intensive high technology space and be successful sustainably.
The pipeline has lower sweating, greater soil movement durability, higher temperatures operation and longer life. This contributes to lower energy costs for its operations and hence with a lower carbon footprint. The pipeline was designed to ensure long life, quality of water, high availability and least operating costs, Utico said.
This project is in line with the sustainability parameters identified for climate change mitigation in generation and transport networks at the recent climate change Summit COP24 meeting in Poland with Utico leading in innovation and sustainability from its inception.
According to Menezes, the recent formation of the public entity, the Emirates Water and Electricity Company will mean new and interesting times for collaboration in the utilities industry driven by value addition, availability and larger public good, rather than by following lowest price alone.
Utico has received investments from GCC sovereign institutions. It also has a partnership with Cobra of Spain for a $200million independent water project.
The company recently bid for the Taweelah IWP, the largest desalination plant in the world in partnership with Islamic Development bank, Sacyr, Flour in Spain, with preferred partner, Arabtec and it was the lowest bidder on the `Design-Build-Operate’ model with the lowest power consumption and hence with the lowest carbon footprint as announced in Global Water Intelligence (GWI) magazine.
“We are also looking at a public listing in the near future and we believe that with such unique assets, services and capabilities, Utico is positioned to be the first full service utility in the Middle East as well as an Emarati company to be publicly traded,” Menezes said, adding that it has appointed Emirates NBD Capital to lead the process with a study underway.