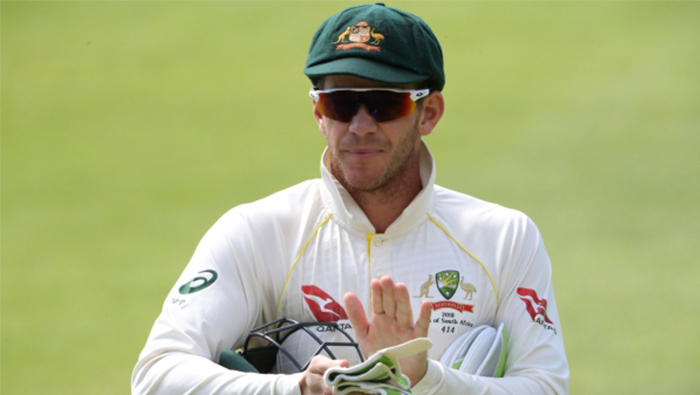 Perth: Australia captain Tim Paine was a relieved man after his team beat India by 146 runs in Perth on Tuesday to level the series with their first Test win since the ball-tampering 'sandpapergate' scandal that rocked international cricket.
Set 287 to win, India resumed at 115 for five on the final day and never threatened to pull off a miraculous victory, losing their last five wickets for just 21 runs.
India were dismissed for 140, with spinner Nathan Lyon claiming 3-39 to finish with eight wickets for the match and guide the home team to a drought-breaking success, their first in seven Tests spanning almost 10 months.
It was Paine's first Test win in five matches since taking over from the suspended Steve Smith in South Africa, and also the first victory for new coach Justin Langer, coming in his hometown.
Paine, who was involved in a verbal spat with Indian counterpart Virat Kohli on the third and fourth days, said the overwhelming emotion was relief at finally being able to put a dark period in Australian cricket behind them.
"I'm relieved personally," he said.
"It's been hard work — the first two Tests of this series have been really tough.
"We've got some inexperienced players in terms of Test matches played, to get a win like that against the best Test team in the world is going to give them a huge boost of confidence."
Kohli defends selections
Kohli defended his side's decision to play four fast bowlers instead of picking Ravindra Jadeja to replace injured spinner Ravi Ashwin.
Despite the lively and at times unpredictable wicket, Kohli said the Indians were confident they could chase down the target, but paid credit to the Australian bowlers.
"We had the belief we could do it," he said.
"They were more relentless and got the balls in the right areas for long enough."
Both captains played down the on-field banter during the match, saying it never crossed the line of what was acceptable.
Australia's previous Test win was against South Africa at St George's Park in March.
It was during the following Test at Newlands that Cameron Bancroft was caught using sandpaper to alter the ball and Australian cricket was plunged into turmoil.
The scandal led to lengthy suspensions from Cricket Australia for Bancroft, Smith and opener David Warner and saw Paine appointed as skipper just months after being recalled to the side.
Australia's best result in the four previous Tests since the scandal was narrowly hanging on for a draw against Pakistan in Dubai.
They had also won only six of 22 one-day internationals and Twenty20 matches since the scandal.
Paine praised the efforts of openers Aaron Finch and Marcus Harris on the first day, saying their century partnership was critical to the final result, and lauded the growing leadership of Lyon.
He said he expected Finch, who split an index finger while batting in the second innings, to be fit for the third Test in Melbourne in eight days.
Having already lost first innings centurion Kohli for 17 on the fourth day, India's hope rested on overnight batsmen Hanuma Vihari and Rishabh Pant.
Tail folds
However, Vihari added just four to his overnight score and fell to Mitchell Starc, who took 3-46, for 28.
The right-hander tried to flick the ball through the leg side, ballooned a simple catch to Harris at midwicket and the last four wickets followed quickly.
The last man to fall was Jasprit Bumrah, who went for a big shot but only succeeded in skying a chance back to bowler Pat Cummins.
The fourth-match series now heads to Melbourne, with the famous Boxing Day Test starting on December 26 and India looking to regroup as they seek to win their first-ever Test series in Australia.