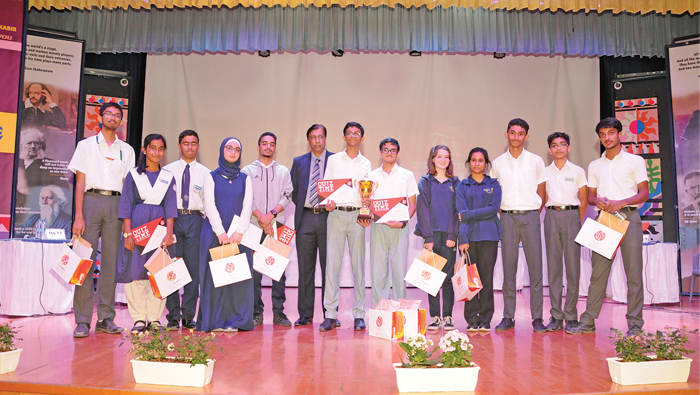 Muscat: Quiz Time, the high voltage inter-school quiz contest on T FM 95.4, culminated on December 11 with Indian School Al Ghubra (ISG) walking away with the coveted Champions League Trophy from among the best and brightest of the finalists.
Six teams, including Indian School Wadi Kabir, Indian School Sohar, Bangladesh School Muscat, Qurum Private School and Knowledge Gate International School, made it to the prestigious Champions League Final, which was held at the Indian School Wadi Kabir auditorium.
The nail-biting final was presided over by the school Principal, D. N. Rao, and attended by students who rooted for their favourite teams, many of whom also won McDonald’s meal vouchers for their participation in the audience rounds.
The weekly radio quiz on one of Muscat’s popular radio stations—TFM 95.4 —brought together a total of 36 teams from schools in and around the country.
As the winning teams of the weekly quiz, 18 schools made it to the penultimate knockout round, dubbed the Champions League, which was held between September and November.
The challenging knockout round saw six schools emerging on top of the leader board to make it to the Champions League Finale.
According to quizmaster Rajesh Raman, it was a spectacular finale with students demonstrating great presence of mind and alacrity to top the scores.
Speaking on the sidelines of the event, he said, “I have been a part of the quizzing scene in Oman over the years, and have been a close witness to the changes in the formats and sets that have become tougher and more comprehensive. But I must admit that the young players today are worldly wise and have an almost encyclopedic knowledge of history, geography, sports, and what have you. T FM Quiz Time saw some incredible performances from schools who fielded their top quiz enthusiasts.”
Quiz Time, which follows in the footsteps of the popular Times of Oman School Quiz, which began after the grand launch of the radio channel in early 2018, has set a benchmark for young quizzers and gives listeners a big dose of infotainment every week.
The decisive episode of the Champions League, with prizes sponsored by Canon, McDonalds and Nabil Biscuits, airs on T FM 95.4.