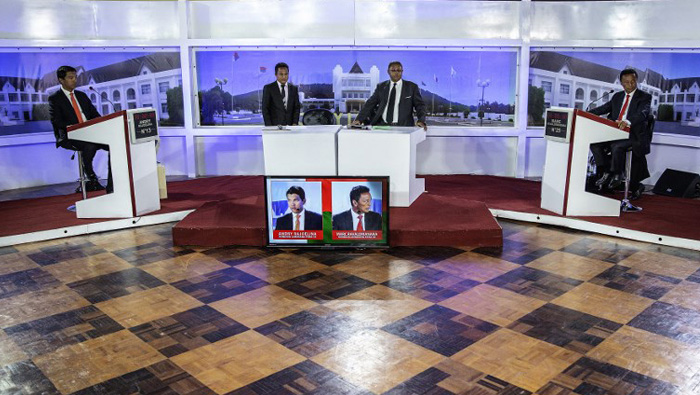 Antanananrivo: Madagascar heads to the polls on Wednesday in a crunch head-to-head election between two arch-rivals who have dominated political life on the poverty-stricken Indian Ocean island for years. The showdown between Marc Ravalomanana and Andry Rajoelina could revive instability in the country if a close result is rejected by the losing candidate, analysts warn. The two contenders will compete in the run-off election after coming first and second, far ahead of their competitors, in the preliminary vote in November. First round Ravalomanana and Rajoelina were both banned from running in the 2013 election as part of an agreement to end recurring crises that have rocked Madagascar since independence from France in 1960. In the first round, Rajoelina, 44, took a slight advantage by winning 39.23 per cent of the vote, compared with 35.35 per cent for Ravalomanana, 69. Both camps alleged they were victims of fraud and cheating. Ravalomanana was first elected as president in 2002 but was forced to resign seven years later by violent demonstrations supported by Rajoelina, the then mayor of the capital Antananarivo. Rajoelina was installed by the army and ruled until 2014. Both candidates have spent lavishly on campaigning in a country that suffers dire poverty, sweeping away their 34 opponents in the first round. Outgoing president Hery Rajaonarimampianina collected just 8.82 per cent of the vote. Campaigning for Wednesday’s election has been personal, with Rajoelina dismissing his rival as an old man who should “retire and go milking his cows.” Ravalomanana has cast his rival as a “destroyer” and denounced his “provocations”. About 45 per cent of the 10 million registered voters abstained from the first round, and the two surviving contenders have criss-crossed the country via helicopter as they pull out all the stops to secure votes on Wednesday. Promises and handouts have been distributed liberally to voters who are among the poorest in Africa. In the south of the country, hit by perennial food shortages, Rajoelina’s campaign activists openly distributed cheap rice and oil. “It’s not for propaganda, it’s just to help the population,” said Serge Serge, owner of a restaurant in Fort Dauphin that hosted the event. “This is the realisation, ahead of time, of the promises of President Rajoelina.” Promises “It’s very good to do this, the prices are too expensive in the market,” said Pauline Lalao, 42, one mother jostling in line, confirming she would vote for Rajoelina as “he understands our problems.” Ravalomanana, who is known by his nickname “Daddy”, has not been shy with promises either.In Antananarivo on Saturday, he unveiled kit that he said he would give to all schoolchildren if he wins. “Here are the backpacks for the children,” he told thousands of supporters. “If they all have the same uniforms, they will be able to study well... I would love your children as if they were mine”. And for Laza Rabaromanana, 34, the choice was clear. “He is the only one able to develop Madagascar,” Rabaromanana said. “When he was president, he was the only one who got all the children into school... he really knows how to do everything.” With the personalities of the two contenders dominating the election, issues such the country’s dire poverty, corruption and lack of basic services have been pushed to one side. And the election battle could further damage the country’s chances of development. “The stakes are enormous, and both men have invested heavily, including financially, in this election,” said analyst Marcus Schneider of the Bonn-based Friedrich Ebert Foundation. “If the results are tight, the loser could challenge the results and plunge the country back into crisis.” “I was hoping for a debate of ideas, I saw a violent duel of egos,” said Sahondra Rabenarivo of the Observatory of Political Life in Madagascar (Sefafi) civil group. “Everything needs rebuilding in this country, but it will only happen if people work together.” Extreme poverty Ravalomanana is a former milkman from a peasant family who went on to build a business empire, while Rajoelina is a former mayor, party planner and successful entrepreneur with slick communication skills. Madagascar is well known for its vanilla and precious redwood, yet is one of the world’s poorest countries, according to World Bank data, with 76 percent of people living in extreme poverty. - AFP