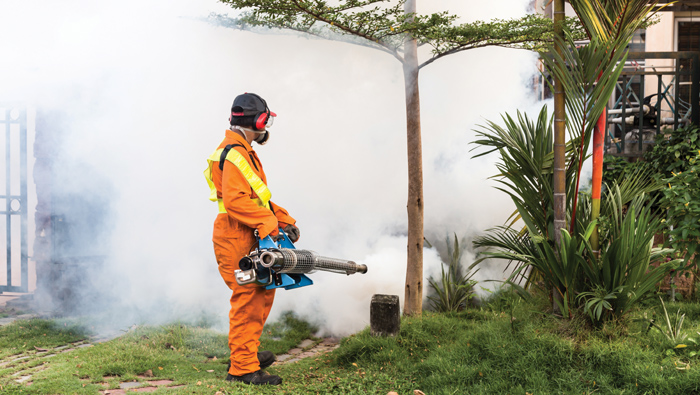 Muscat: The search for the presence of the aedes aegypti mosquitoes will be extended to more areas, according to the Ministry of Health.
Speaking to the Times of Oman, Abdullah Al Sharji, head of port health at the Ministry of Health, said, "We are still investigating the source of the dengue mosquito, it could have come from any country. We selected the Wilayah of Seeb because the patient affected by dengue is from Seeb."
Al Sharji, who is also a part of the probe team, added, "Based on the results from Sunday's investigation, there is a possibility that the field investigation could extend to Tuesday and include more areas in the Sultanate."
The Ministry of Health, in cooperation with the Municipality of Muscat, announced the continuation of the probe into the presence of Aedes aegypti mosquitoes in certain areas in Seeb.
The areas according to the ministry are: "Northern Mabellah, Southern Mabellah districts 4, 5, 6, and 7, Southern Mabellah district 9 and 10, Al Khoud districts 2,3,4, 5 and 6 Southern Mawaleh districts 4 and 5."
The Ministry has called on all citizens and residents living in these areas to cooperate with the teams. The field investigation began on Thursday and the ministry divided the Wilayat of Seeb into blocks. Blocks 1 and 2 were inspected from Thursday to Saturday, and on Sunday, six other blocks were investigated.
Block 3, which is located in North Mawaleh and the airport area; Block 4, which is South Mawaleh area; Blocks 5 and 6 in Al Khoudh districts three, four and five; Block 7 in Wadi Al Lawami, Sur Al Hadid and Sharadi; and Block 8, which includes South Mawaleh four and five, and Al Khoudh district 2.
According to Al Sharji, there are six teams covering Seeb and each team has four investigators. "Citizens and residents of the areas have been very helpful in supporting us and allowing us to work in their homes and farms."
"However, the problem we faced is that some of the homes are locked or abandoned and so in those cases, we record the house number in case we want to return to it in the future," added Al Sharji.
The search comes after the Ministry of Health announced that a case of dengue was recorded in the Sultanate.
According to the ministry’s statement, the Aedes aegypti mosquito transmits dengue, yellow fever, the Zika virus, and other viral diseases.
The ministry has advised the public on ways they can avoid mosquito bites, such as wearing long-sleeved, body-covering clothes; using mosquito-repelling ointments on exposed parts of the body; closing windows with a mesh to protect themselves against mosquitoes; and spraying households with insecticides.
The ministry also advised the public on ways to eliminate mosquito breeding, such as discarding water that is stored every five days and cleaning tanks, disposing of water collected from air conditioners and changing the water of fans and other places where water gets accumulated.
People should also change the water in animal and bird drinking containers and clean the bowls before refilling them every five days, cover water reservoirs, dispose of used tyres, and ensure the disposal of empty dye cans and damaged utensils.