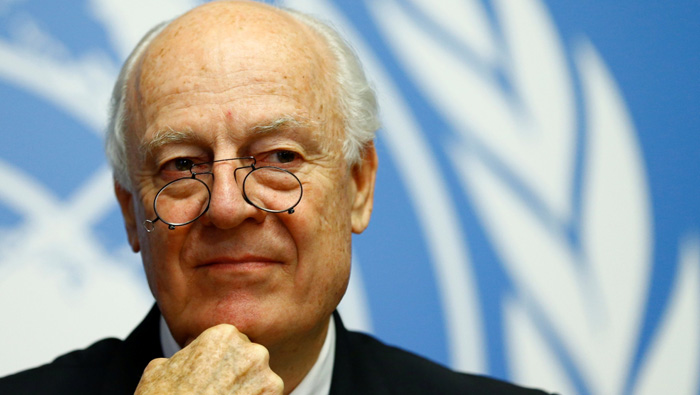 Doha: Outgoing UN envoy for Syria Staffan de Mistura on Sunday said that peace in the war-wracked country could be won through a post-war "inclusive constitution".
De Mistura is trying to set up a UN-backed constitutional committee for Syria that would include 50 members chosen by Damascus, 50 by the opposition and 50 by the United Nations, before stepping down later this month.
"One can win territorially in conflict, especially if one has strong military support from friends, but the issue is can you win peace," he told an international conference in Doha.
"We are getting into that phase," which includes reconstruction, rehabilitation and the return of refugees, de Mistura said.
The planned constitutional committee was agreed at a Russia-hosted conference in January.
The centrepiece of UN peace efforts in Syria, the committee would be tasked with negotiating a new post-war constitution that would pave the way to elections aimed at turning the page on seven years of devastating war.
But it has run into objections from the Syrian government.
The opposition has pushed for an entirely new constitution, but Damascus has said it will only discuss altering the current one.
In October, Damascus rejected a list presented by de Mistura of 50 civil society representatives and technical experts.
"You cannot win a war full stop," de Mistura stressed.
But peace could be accomplished "through a credible inclusive constitution", he added.
De Mistura, an Italian-Swedish diplomat who has been the UN's peace envoy since July 2014, was due to step down at the end of November, but he agreed to stay on for an extra month to lead a final push.
Last month he said the UN is still hoping to send invitations to committee members by mid-December and convene a first meeting before December 31.
Russia, Turkey, Germany and France have called for the committee to be formed by the end of the year.