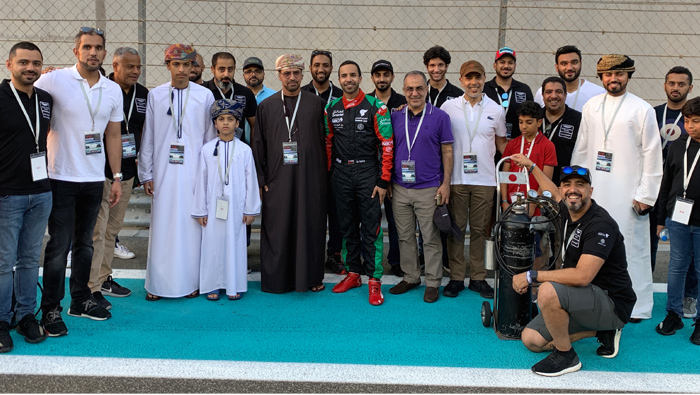 Abu Dhabi: Aston Martin Vantage GT3 drivers Ahmad Al Harthy, Jonny Adam and Darren Turner almost secured podium success for Oman Racing during the annual Gulf 12 Hours in Abu Dhabi on Saturday with a highly competitive top four finish.
While an issue in the first pit-stop proved costly, and was ultimately the deciding factor in the fight for the overall and GT3 Pro class podiums, superb driving from the team-mates enabled Oman Racing to conclude the race as the highest placed of the Aston Martin entries – a notable accolade.
Initially running in the top four, and with the podium well within reach, the loss of time in the pits at the end of the opening hour dropped the team back to 14th place overall and sixth in class. Battling back superbly, Oman Racing certainly proved its mettle over 12 action-packed hours.
“We had a very solid performance overall, only one glitch which meant we had to do a quick re-boot in the pits early on and that put us approximately a lap down – so it was extremely hard to try and recover from there but everyone did a fantastic job”, said Muscat’s Al Harthy. “We kept climbing back through, kept pushing, and the team, as always, was very professional and we were delighted to be the lead Aston Martin home. It was also a very strong debut for our new car, Abu Dhabi is a tough circuit but everyone at Oman Racing did a really great job.”
Al Harthy added: “I want to express my sincere thanks to the Under Secretary of the Oman Ministry of Sports Affairs, Sheikh Rashad bin Ahmed Al Hinai, and also the Oman Ambassador to the UAE, Dr Khalid Al Jaradi, who were both with us. Obviously, I wish to thank all of the supporters who came to see us too and my sponsors for standing by me and making this happen.”
Beginning the team’s final race of 2018 from fifth on the grid, third in the GT3 Pro class, Turner took the opening stint of the first six hours of action and he moved up into the outright top four while retaining third in class during the first 60 minutes in the Oman Ministry of Sports Affairs, Oman Air, National Bank of Oman, Omantel, Barr Al Jissah and Amouage liveried
Aston Martin.
Unfortunately, though, the first pit-stop didn’t go to plan when the No.97 car lost a full lap after having problems re-starting, a legacy of a fuel problem, and so the team slipped to sixth in GT3 Pro and 14th position overall.
Now with Al Harthy at the wheel, the Omani was determined to make significant headway but his quest was stymied by a number of yellow flags during his first stint. Pitting to hand over to Adam at the three-hour mark, the Scottish driver managed to break into the outright top 10 but concluded hour four still sixth in class.
Turner got back behind the wheel at the third pit-stop and went on to conclude his second stint sixth in GT3 Pro and seventh overall, with Adam then maintaining those positions to the end of the final hour of phase one of the race.
Following a break of a couple of hours, the second six-hour portion of the race began as the sun started to set over Yas Marina with Al Harthy back behind the wheel of the Aston. Managing to get the lap back which had been lost earlier, the Muscat driver finished hour seven sixth in class still, and seventh overall, before Adam then managed to climb into the outright top six in hour eight.
Turner then got back behind the wheel and, with a similarly strong stint to the one Adam had delivered just before, Oman Racing moved into both the class and overall top five. Pushing on with the podium edging closer and closer, Adam took the penultimate stint – breaking into the top four after problems for a rival – and Turner took the No.97 car to the flag, securing a hard-earned fourth.
“With how we’ve ended 2018, I think 2019 should be a very positive year for Oman Racing and we really are looking forward to it already”, said Al Harthy, “Hopefully we’ll be in a position to announce our plans quite early in the New Year.”