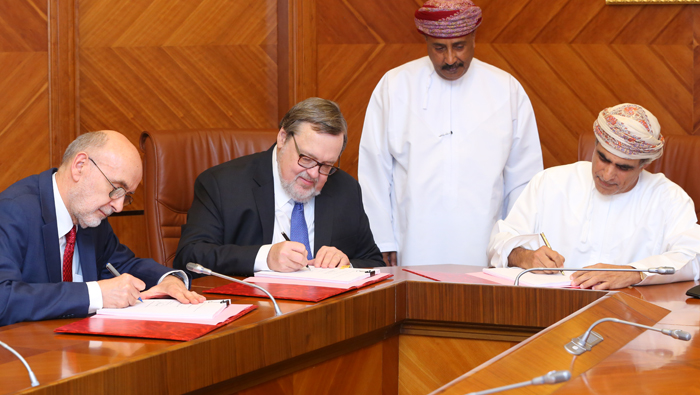 Muscat: The Ministry of Oil and Gas has signed two new Exploration and Production Sharing Agreement (EPSA) worth $65 million for having the rights to explore and develop the concession Blocks 51 and 65.
The agreements were signed by Dr Mohammed bin Hammad Al Rumhy, Minister of Oil and Gas with Occidental of Oman (OO) for the concession Block 51 that occupies an area of 10,133 square kilometres. However, the agreement for the concession Block 65 is a joint venture with OO and Oman Oil Company Exploration and Production (OOCEP) that occupies an area of 1,230 square kilometres.
“The concession Blocks 51 and 65 will be drilled for the exploration of both crude oil and gas however, Block 51, situated mostly in Al Dakhliya and a part in North Sharqiyah has more possibility of gas. Block 65 is located in Al Dhahira region,” informed Dr Salman Mohammed Al Shidi, Director General of the Management of Petroleum Investment at the Ministry of Oil and Gas while talking to Times of Oman.
“The total investment signed today of $65 million will be utilised over a period of six years. However, $38 million is allotted solely for phase 1 for the duration of three years and the remaining amount will be utilised for phase 2, again stretched over a period of three years, after seeing how successful they are in phase 1,” Al Shidi added.
The commitments of the companies under the agreements are obtaining geological and geophysical studies, 2D and 3D seismic acquisition and drill wells during exploration periods.
The director general said that the activity will involve seismic analysis of the existing seismic data and reshooting of it in 3D as the existing one is available in 2D only. “Hopefully, with these additional seismic and geological studies, they will be able to find more prospects that will allow them to drill wells.”
Speaking about the number of wells planned to be drilled through the agreement, Al Shidi informed that the total number of wells are 14, with 9 to be drilled in Block 65 and 5 wells in Block 51 in two phases.
“In phase 1 of Block 65, we are targeting to drill three wells and another six as well as conduct a 3D seismic survey of about 200 square kilometres. The total investment put in from the companies for this phase is $32 million.
“Whereas for Phase 1 of Block 51, we are targeting to do more geological studies, and study the existing seismic surveys that were done previously and drill two wells. The total commitment put in this phase is of $6 million,” Al Shidi explained.
He added that Phase 2 of Block 51 has an investment of $14 million and will conduct a 3D seismic survey of 400 square kilometres as well as drill additional three oil and gas wells.