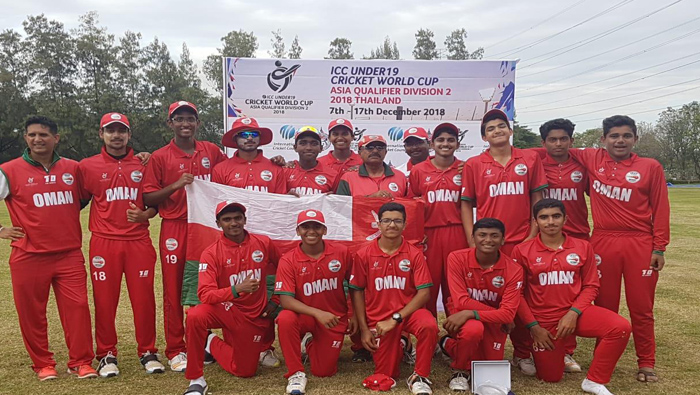 BANGKOK: Oman rode on two superb spells by Sanjaya Ravindra and Kevin Stagy Kattokaran, the two highest wicket-takers of the tournament, to beat Hong Kong by 30 runs in the semifinal yesterday, setting up a summit clash with Kuwait in today’s final of the ICC Under-19 Cricket World Cup Qualifier Asia Division Two in Bangkok.
Kuwait thrashed Qatar by 107 runs in a one-sided semifinal earlier yesterday.
For a change, Oman batted first but was bundled out for 130 in the 47th over. Opener Adeel Abbas top scored with a patient 30 off 61 while wicketkeeper batsman Joel Biju contributed 28 off 63. Nasrulla Rana bagged three wickets for 25 while Vikas Sharma and Dhananjay Rao picked up two each.
Hong Kong may have fancied its chances against a modest target but Oman made it look like a mountain to climb with one penetrating spell after another.
Hong Kong was finally dismissed for 100, thanks to Sanjaya’s brilliant spell of 9 overs, 3 maidens, 4 wickets for 20 runs.
Kevin (8-2-27-3) and Amandeep Singh (10-1-27-2) bowled equally well to hasten Hong Kong’s demise and Oman’s passage to the final.
Sanjaya and Kevin now lead the tournament bowling charts with 14 and 13 wickets respectively ahead of 12 by Qatar’s Shubh Agarwal. The Oman duo also have the best average and best economy rates among the top bowlers in the tournament.
Sanjaya has taken his 14 wickets averaging an amazing 4.21 at an incredible economy rate of 2.03. Equally impressive, Kevin’s 13 wickets have come at an unbelievable average of 3.92 at a miserly rate of 1.42. Amandeep has claimed 9 wickets in the tournament so far, averaging 8.88 at an impressive economy rate of 2.48.
Today’s final will see two unbeaten teams going hard at each other for the ultimate prize.
Kuwait’s in-form batsmen, who have amassed over 800 runs so far, will be fully tested by Oman bowlers who have not allowed any team to go past 100 in all the 5 games they have played so far except Saudi Arabia who managed to score 104. Oman coach Tariq Hussain remains undeterred by Kuwait’s batting might.
“We are not worried at all. In fact, it’s Kuwait who should be worried as we beat a good side in the semifinal. We are going into tomorrow’s final as a supremely confident team that believes it can win this tournament,” he said.
When asked if he was worried about his batting, Tariq said his boys had the ability to score runs against any opposition.
“We have good batsmen in our team but yes some of our boys are not scoring and that is a concern, but we have proved that we are capable of defending even small totals,” he added.
When asked about Oman’s strategy against an in-form team tomorrow, the coach preferred to keep his cards close to the chest.
“Whether we bat first or bowl, we are going to go out there and play positive cricket. The whole team is focused on its ultimate goal of bringing the cup home,” he stressed.
Brief scores: Oman Under-19 130 all out in 46.2 overs (Adeel Abbas 30 –3x4, Joel Biju 28 – 3x4. Nasrulla Rana 3-25, Vikas Sharma 2-22, Dhananjaya Rao 2-24) beat Hong Kong Under-19 100 all out in 35 overs (Abdul Urslan 22 not out – 1x4, 2x6, Mehran Zaib 19 – 2x4, 1x6, Daniyal Butt 18 – 4x4. Sanjaya Ravindra 4-20, Kevin Stagy Kattokaran 3-27, Amandeep Singh 2-27) by 30 runs.