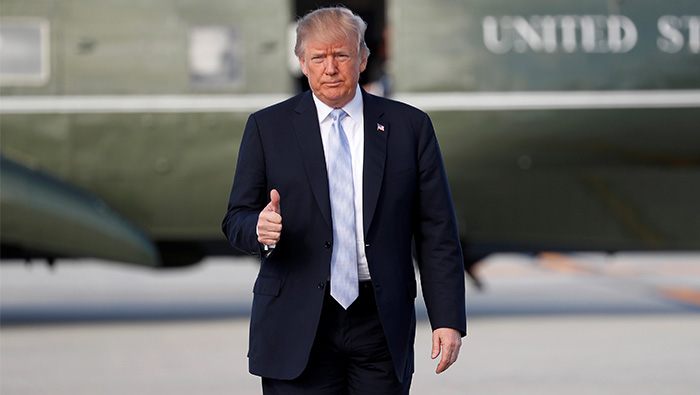 Washington: President Donald Trump, who was criticised last month for skipping a visit to a cemetery in France where US soldiers are buried, made an unscheduled visit on Saturday to a military cemetery near Washington for a wreath-laying ceremony.
His visit to nearby Arlington National Cemetery took place on a gray and rainy day — not unlike the conditions at the Aisne-Marne American Cemetery east of Paris, which Trump was set to visit in early November before canceling.
Trump, who was in France to mark the 100th anniversary of the end of World War I, said at the time that aides had insisted the weather made it unsafe to fly by helicopter to the cemetery.
He was also criticised for failing, upon his return from France, to visit Arlington to mark Veterans Day.
Trump later explained that he was "extremely busy on calls for the country" that day, but added, in an interview with Fox News, "I should have done that."
Carrying a large black umbrella, the president took part in a brief ceremony in Arlington, part of a "Wreaths Across America" day when volunteers lay thousands of wreaths on the tombstones of military veterans.
In brief remarks to reporters, he said the government was working to expand Arlington, where more than 400,000 men and women are buried, by purchasing nearby land. "We're working very hard on it. We'll get it done."
Arlington, on land once owned by a descendant of George Washington, lies directly across the Potomac River from the capital, just a few minutes' drive away.