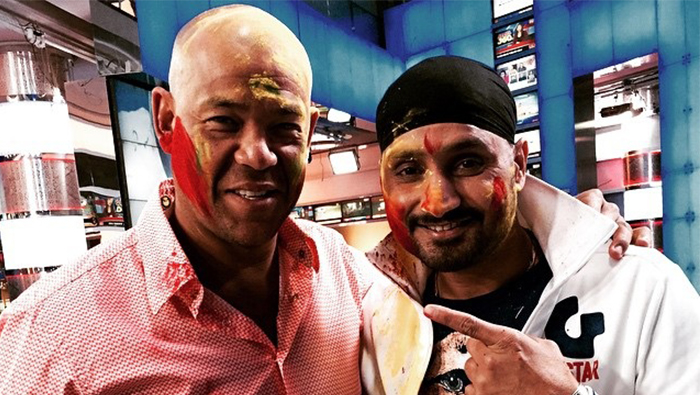 Perth: Indian spinner Harbhajan Singh "broke down crying" when he finally made up with Andrew Symonds after the infamous "monkeygate" scandal had sent the Australian all-rounder into a downward spiral, he revealed on Sunday.
A decade on from the ugly incident in the 2008 Sydney Test, where Singh was accused of calling Symonds a "monkey", the Australian said they emotionally called a truce three years later.
It happened when the pair were awkwardly reunited by the Mumbai Indians in the Indian Premier League.
"We go to a very wealthy man's place for a barbecue, drinks and dinner one night and the whole team's there and he had guests there, and Harbhajan said 'mate, can I speak to you for a minute out in the garden out the front'," Symonds told Fox Sports.
"He goes, 'look, I've got to say sorry to you for what I did to you in Sydney. I apologise, I hope I didn't cause you, your family, your friends too much harm and I really apologise for what I said, I shouldn't have said it'.
"And he actually broke down crying, and I could just see that was a huge weight off his shoulders, he had to get rid of it. We shook hands and I gave him a hug and said: 'Mate, it's all good. It's dealt with'."
Singh, who at time denied any wrongdoing, was charged with racial abuse and suspended for three matches. But the ban was overturned when India threatened to quit the tour in what was an all-time low in India-Australia cricket relations.
It left Symonds feeling let down by the system while the need for teammates and close friends Matthew Hayden, Adam Gilchrist, Ricky Ponting and Michael Clarke to step up as witnesses weighed on his conscience.
Symonds, who was born in England with one of his parents of West Indian background, has previously recounted how his life went downhill after the incident.
He started drinking heavily and in June 2009 his Cricket Australia contract was withdrawn after he was sent home from the World Twenty20 following the latest in a series of alcohol-related indiscretions.
"I suppose this would be the moment where my whole persona to cricket changed," Symonds, who is commentating on India's current tour of Australia, said of "monkeygate".
"I didn't realise how powerful one player, one incident, how much money was at stake and the ramifications."