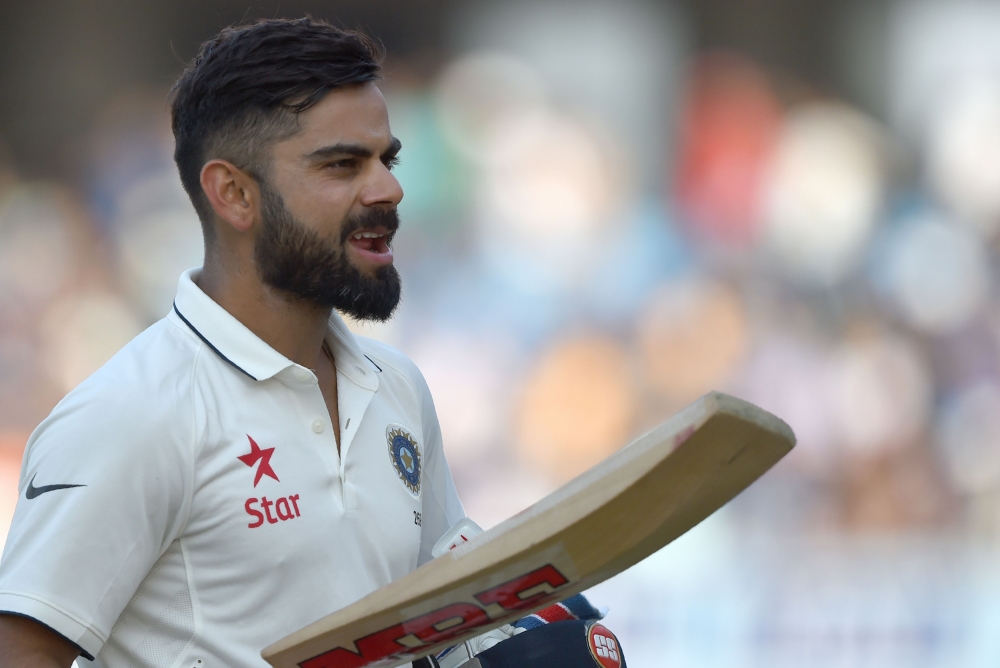 Perth: Indian batsman Virat Kohli smacked his 25th century on Sunday and his sixth in Australia, joining the elite company of boyhood hero Sachin Tendulkar.
Playing in his 75th Test, the Indian run-machine did it in style with a classic straight drive off Mitchell Starc to reach triple figures on day three of the second Test in Perth.
He hit 11 fours in the battling 214-ball ton after coming to the crease on a fast and bouncy pitch with his team in trouble at eight for two in reply to Australia's first innings total of 326.
He was eventually out for 123, caught at slip by a diving Peter Handscomb off Pat Cummins.
In bringing up 100, he become the second-fastest batsman to 25 Test centuries in terms of innings, with 127, and the crowd showered him with applause.
Countryman Tendulkar is third with 130, while Don Bradman managed it in just 68.
The often expressive Indian captain immediately took off his helmet, pointed to his bat and gestured with his glove.
Kohli had resumed on 82 and barely gave the Australians a glimmer of a chance in reaching the ton, playing an array of strokes all around the wicket.
It was his sixth century in Australia, matching the feat of Tendulkar and motoring him past Alastair Cook, David Gower and Clive Lloyd.
While Tendulkar took 20 Tests to get his six centuries, Kohli only needed 10, further cementing his place as one of the all-time greats.
Only England's Jack Hobbs (nine) and Wally Hammond (seven) have more.
Speaking at the end of day two, Australia's Mark Waugh, who scored 20 Test centuries, said if Kohli brought up three figures it would rate as one of his finest ever.
"We know Kohli is a great player and he was probably due to make a big score against Australia after misfiring in recent Border-Gavaskar Tests," he wrote for Fox Sports.
"Given the calibre of Australia's attack and how foreign these conditions are for the Indians, if Kohli does turn this into a hundred it will be one of the best of his career given the factors at play."