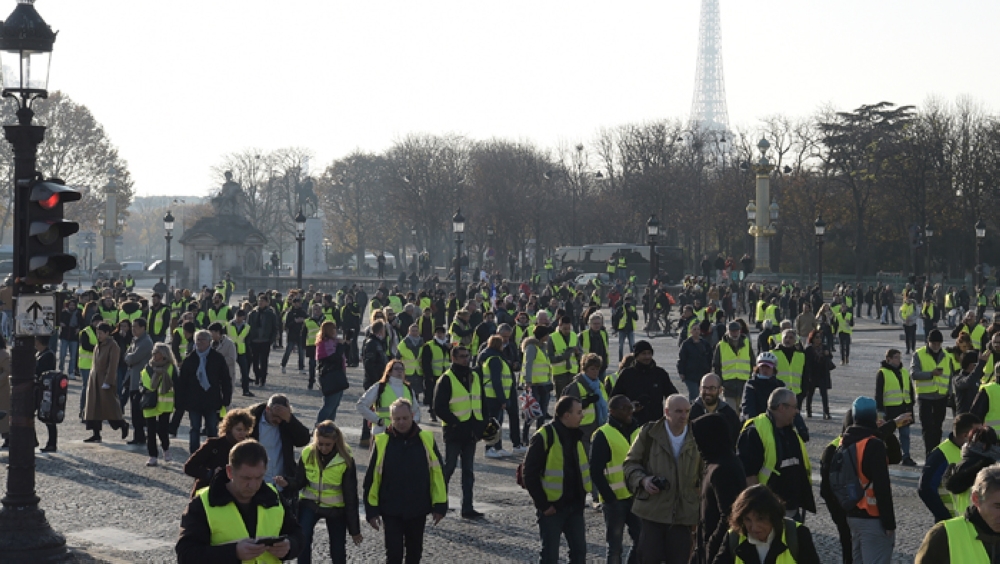 Paris: Groups of defiant "yellow vest" demonstrators faced off with tens of thousands of police around France on Saturday, but their numbers were sharply lower on a fifth and decisive weekend for the anti-government movement.
President Emmanuel Macron, facing the biggest crisis of his presidency, announced a series of concessions on Monday to defuse the explosive "yellow vest" crisis, which swelled up from rural and small-town France last month.
He was hoping that the package of tax and minimum wage measures for low-income workers, coupled with bitter winter weather this weekend, would help bring calm to the country after more than month of clashes and disruption.
France was also hit by a fresh terror attack on Tuesday night when a gunman opened fire at a Christmas market in Strasbourg, leading the government to urge people to stay at home to spare the country's stretched security forces.
At midday, an estimated 33,500 people had taken to the streets, according to figures from the interior ministry, around half the level at the same time last weekend.
"It's a bit disappointing. We expected there to be more people, but the movement won't end," Francis Nicolas, a 49-year-old labourer, told AFP in the southeastern city of Lyon.
There were only a few hundred people dressed in the florescent yellow high-visibility jackets in front of the city's main court building, compared with 7,000-10,000 last weekend.
In Paris, police outnumbered protesters by nearly 4-1 in the early afternoon, with around 2,200 protesters counted on the streets of the capital by local authorities compared with 10,000 last week.
Security forces played a game of cat-and-mouse with groups of them as they roamed around shouting slogans through the centre of Paris, much of which was cordoned off from traffic.
There were isolated incidents of tear gas being fired, but a fraction of the amount used on the weekends of December 8 or December 1 when graffiti was daubed on the Arc de Triomphe in scenes that shocked France.
Until this week, a clear majority of French people had backed the protests, which sprung up initially over high taxes before snowballing into a wider opposition to Macron's pro-business agenda and style of governing.
But two polls published on Tuesday -- in the wake of Macron's concessions -- suggested the country was now broadly 50-50 on whether the protests should continue.
In a bid to end the protests, a visibly contrite Macron announced a package of measures on Monday in a televised address, estimated by economists to cost up to 15 billion euros ($17 billion).
The 40-year-old former investment banker acknowledged widespread animosity towards him and came close to apologising for a series of verbal gaffes seen as dismissive of the poor or jobless.
He cancelled planned fuel tax hikes for 2019, offered a rise in the minimum wage of 100 euros a month next year, as well as tax relief for many pensioners and tax-free overtime.
Some senior figures in the "yellow vest" movement, which has no official leaders and dozens of separate demands, had urged protesters to continue to press home their advantage.
"It's really the time to keep going," one of them, Eric Drouet, said in a video posted on Facebook. "What Macron did on Monday, was a call to carry on because he has started to give ground, which is unusual for him."
Many protesters appeared to have switched their focus from the core issue of the protests so far -- taxes and spending power -- to other demands such as the greater use of referendums to decide government policy.
"Last time, we were here for taxes," a 28-year-old "yellow vest" called Jeremy told AFP as he arrived on the Champs-Elysees in the freezing cold on Saturday morning.
"This is for the institutions: we want more direct democracy," he said, adding that people needed to "shout to make themselves heard".
Outside Paris, groups of "yellow vests" occupied roundabouts to slow down traffic, and there were major jams on the motorways in southern France as well as on the A16 near Calais in the north.
Authorities reported the seventh death linked to the demonstrations in a fatal road accident Friday evening near the France-Belgium border caused by a blockade.
More than 1,400 people have been injured since the protests began on November 17.
Around 8,000 police were on duty in Paris on Saturday, the same number as last weekend, backed up by 14 armoured vehicles, water cannons and horses, which are used for crowd control.
Around 69,000 security forces were mobilised across France, down from 89,000 last Saturday when 2,000 people were detained.
On Thursday, government spokesman Benjamin Griveaux had called on protesters to stay at home on what is normally a busy shopping weekend ahead of Christmas.
"It would be better if everyone could go about their business calmly on Saturday, before the year-end celebrations with their families, instead of demonstrating and putting our security forces to work once again," he said.
He was speaking in the wake of the attack on Tuesday in the eastern city of Strasbourg, which left four dead and 12 wounded.