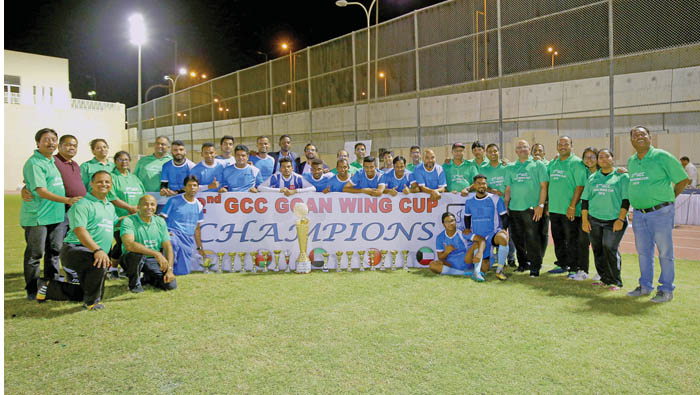 Muscat: In a thrilling final encounter, FC Siolim, Dubai defeated Don Bosco Oratory Goa, Kuwait 5-4 in a penalty shootout to win the 2nd GCC Goan Wing 8-A-Side Football Tournament held at the Al Amal Club on November 9. Team STS were the second runner up in the
tournament.
Right from the start, the clash for the title was action-packed, as both teams played strong and entertaining football under the floodlights. Both the teams were young and talented, which could be noticed in their speed, skill and stamina that were evenly matched.
In the semifinals, FC Siolim Dubai beat Curtorim Club, while Don Bosco Oratory Goa, Kuwait got the better of Team STS. The man of the match of semi-finals went to Alan of Don Bosco Oratory, Goa, Kuwait and Frehauf Fernandes of FC Siolim, Dubai.
Don Bosco Oratory Goa, Kuwait also bagged individual honour as their player Melwyn Fernandes won the “Highest Goal Scorer of the Tournament as well as Player of the Tournament” awards. Malcolm of FC Siolim Dubai won“Best Goal Keeper” award. “Man of the Match” award for the finals was won by Frehauf Fernandes from FC Siolim Dubai. “Best Disciplined Team” award went to Goa United and the “Best Dressed Team”was won by Muscat United.
In the ladies team tie-breaker, Delhria, Adelina and Marina of FC Siolim bagged the top position, while Maria, Jean and Avril of Spice Girls won the runners-up spot. The tug of war for ladies evoked a spirited response as participants from various age groups lined-up on opposite sides and entertained the spectators. D J entertained the crowd before the finals with some Goan music and many spot prizes were distributed throughout the day.
The second GCC Goan Wing 8-A-Side Football Tournament was declared open by chief guest Bibiano Fernandes, head coach
of India Under-16 National football team.
During the course of the tournament the Goan wing felicitated two young footballers Taniya Aldonkar and Ms. Pari Haldonkar who represented Oman (Indian school team) in the under 19 Nationals at Indore in 2017. Bibiano Fernandes presented them with a memento.
Other special guests present for the tournament were General Secretary of Indian Social Club & Goan Wing Observer Mr. P. Babu Rajendran, Founder Convenor and Advisor to the Goan Wing Antonio Goes and Allan D’Costa (Former President GCO).
Recognition award was handed over to Savio Martyres for excellent coordination with the GCC Teams and for being the main coordinator for the event.
Anthony Lourenco, Convenor of the Goan Wing, expressed his gratitude to all the sponsors, volunteers, committee members and well-wishers who contributed wholeheartedly to make the football festival a grand success. He also thanked the other guests present and the crowd for the support and enthusiasm.