Oman U-19 take on Hong Kong in today’s semis 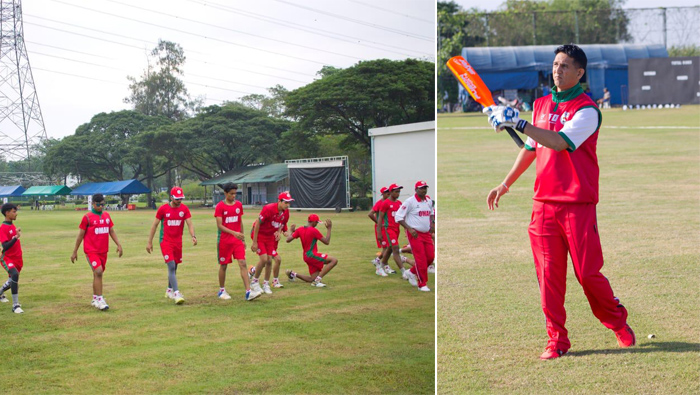 BANGKOK: Brimming with confidence Oman Under-19 boys are ready to take on Hong Kong in today’s first semifinal of the ICC Under-19 Cricket World Cup Qualifier Asia Division Two here in the Thai capital.
Kuwait face Qatar in the other semifinal while the final will be played on December 17.
The only unbeaten team in the tournament so far, Oman team has decimated all opposition in the four group matches leading up to the semifinals. Such has been Oman’s dominance that only Saudi Arabia has managed to get past a score of 100 against its well-oiled bowling machine packed with wily spinners and crafty pacers.
In its first match, Bhutan was dismissed for a paltry 48 which Oman chased in the 12th over, losing only two wickets. Qatar and Saudi Arabia could muster only 59 and 104 in embarrassing defeats before Thailand was bundled out for a meagre 70 in a 6-wicket drubbing.
“We are having a wonderful tournament and hope to continue our winning streak in tomorrow’s semifinal against Hong Kong. The team is in terrific form now and determined to perform to the best of its ability in order to fulfil its ultimate goal of bringing the cup home,” said an elated Oman coach Syed Tariq Hussain.
Asked about his team’s secret to success so far, the coach said, “An absolute focus on the team’s goal and taking one game at a time to do so. I am proud of my boys for staying fully focused, particularly the bowlers who have been bowling out oppositions cheaply and putting us in match-winning positions. We have received great support from Oman Cricket and hundreds of our supporters are in touch and praying for our success.”
Left-arm spinner Kevin Stagy Kattokaran and leg-spinner Sanjay Ravindran have been among the leading wicket-takers of the tournament with 10 wickets each. Only Shubh Agarwal of Qatar (12) and Ngawang Thinley of Bhutan (11) have taken more wickets. Oman’s Amandeep Singh Sirah has also impressed with his tally of 7 wickets so far. Neev Poojari is Oman’s leading scorer in the tournament with 75 runs in 3 games he has played so far.
In its last group game on Thursday, Oman beat Thailand by 6 wickets in another low-scoring affair. Sanjay Ravindran took 4 for 11 while Yash Mehta and Amandeep Singh claimed three and two wickets as Thailand was dismissed for 70 in the 39th over.
Oman overhauled the small target in the 24th over, scoring 74 for 4. Neev Poojari top scored with 16 off 41 while Adeel Abbas contributed 14 off 28. Thailand’s Sarawut Maliwan claimed 3 for 24.
Brief scores: Thailand U-19 70 all out in 38.1 overs (K Ruengrotchannachai 23 – 3x4. Sanjay Ravindran 4-11, Yash Mehta 3-18, Amandeep Singh 2-21) lost to Oman U-19 74 for 4 in 23.4 overs (Neev Poojari 16, Adeel Abbas 14 – 2x4, Sami Al Balushi 12. Sarawut Maliwan 3-24) by 6 wickets.