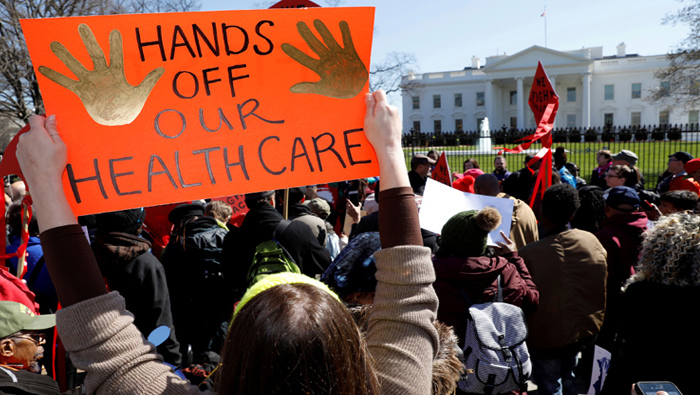 Washington: A federal judge in Texas has ruled that the US health care law known as Obamacare is unconstitutional -- a ruling that opposition Democrats quickly vowed to appeal.
US District Judge Reed O'Connor's ruling came on the eve of the Saturday deadline to sign up for 2019 coverage in the federal health care programme, known officially as the Affordable Care Act.
The White House said it expects the case to be appealed to the Supreme Court. "Pending the appeal process, the law remains in place," it said in a statement.
At the US Supreme Court, five justices in the nine-judge court who voted to uphold Obamacare in a separate case in 2012 are still on the bench.
Conservative Republicans have long opposed President Barack Obama's landmark healthcare plan which he signed into law in 2010.
President Donald Trump made abolishing the program one of his main campaign pledges.
The Texas-based judge said that the full Obamacare program was unconstitutional because in last year's tax overhaul, Congress eliminated a penalty for people who failed to sign up for the program if they did not already have their own health insurance.
The 2012 case was over whether such a penalty was legal -- but now that it is gone, O'Connor says the whole Affordable Care Act should be stricken down because that provision is "the keystone" of the program.
President Trump lost no time in tweeting his delight at the court's ruling on a complaint brought by several Republican attorneys general and two Republican governors.
"Wow, but not surprisingly, ObamaCare was just ruled unconstitutional by a highly respected judge in Texas. Great news for America!" Trump wrote on twitter. "As I predicted all along, Obamacare has been struck down as an unconstitutional disaster!" he said.
Trump urged Republican Senate Majority Leader Mitch McConnell and Democratic House of Representatives speaker-designate Nancy Pelosi to "pass a strong law that provides great healthcare."
Angry Democrats vowed to fight back as they blamed Republicans for what they see as a debacle that will leave millions of Americans without healthcare.
Polls consistently show that the ACA coverage guarantee regardless of pre-existing health conditions has strong popular support -- an issue the Democrats used with great success in the recent November midterm elections in which they won control of the House of Representatives.
O'Connor's late Friday ruling "exposes the monstrous endgame of Republicans' all-out assault on people with pre-existing conditions and Americans' access to affordable healthcare," Pelosi said in a statement.
While the court's "absurd ruling will be immediately appealed, Republicans are fully responsible for this cruel decision," she said.
She vowed that when Democrats take over the House of Representatives in January, lawmakers "will move swiftly to formally intervene in the appeals process" to uphold Obamacare.
Opposing the Republican lawsuit were 17 Democratic attorneys general led by Xavier Becerra of California.
They argue that the tax law changes do not mean that the whole Affordable Care Act becomes unconstitutional.
The Texas ruling "is an assault on 133 million Americans with pre-existing conditions" and on "the 20 million Americans who rely on the A.C.A.'s consumer protections for healthcare," Becerra said in a statement.
"Our fight to save Obamacare is far from over. We will continue to fight these efforts to take Americans' healthcare away," he tweeted.
West Virgina Democratic Senator Joe Manchin, a state where Trump is popular and whose conservative attorney general is one of the lawsuit plaintiffs, issued a statement attacking the ruling as "misguided and inhumane."