Lara Al Yafei to Omani girls: Never give up 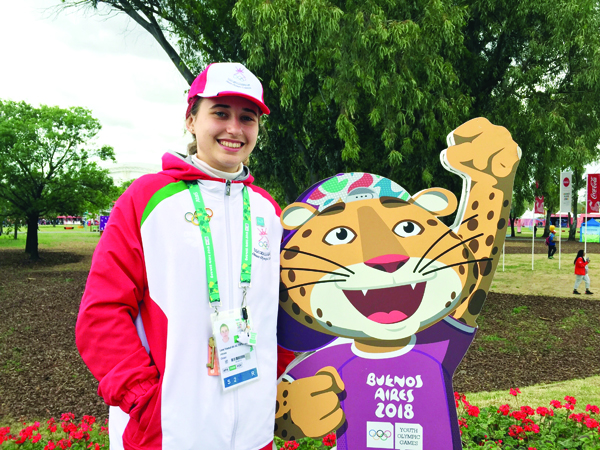 Muscat: Oman’s first female Olympic swimmer has urged Omani girls to always stay the course and never give up on their goals, no matter what the odds are that they face.
Speaking exclusively to Times of Oman on the occasion of the Sultanate’s 48th National Day, 16-year-old Lara Al Yafei, who became the first Omani woman to represent her country at an Olympic swimming event at the recently held 2018 Youth Olympic Games in Buenos Aires, said there were many occasions to give up, but she always found the mental strength to remain strong.
“I remember my first day, when I was around 13 years old, swimming for the national team,” she said. “My dad and I saw about 40 swimmers, and they were all guys, and they were all looking at me. This was only natural, because this was the first time in history that a girl was going to swim for the national team, so it was unusual for them. My dad told me it was okay to give up and no one would say I was wrong.
“You can give up, not go swimming, and then afterwards feel bad for yourself, or you can keep going and just try to get to the other side, and you will eventually be fine,” she added.
“I went with the second option, and the message I have for girls is to keep going. Even if you don’t win the race, just the fact that you keep going is your owing it to yourself. Just keep going.
Lara recalled, “I was extremely proud to represent Oman and I remember my proudest moment. I was preparing to get ready for my race, and I was watching TV. This programme was presented to hundreds of thousands of people around the world, and it had my name with the flag next to it. I was so proud, and this is something I will never forget.”
Having begun to swim at the age of just five, Lara was always a very disciplined girl. Preparing for the Olympics, though, required her to take her discipline up several notches.
“This was such a dream for me,” she said. “I remember, when I was 13, I began swimming for the Oman national swimming team, and I think this really happened when I just kept going. I was swimming since I was five years old, but three months before the Youth Olympics I was super-disciplined. Usually, I am disciplined, but this was discipline to another level. I was swimming four to five hours a day and I was really tired, I did a lot of gym work, and I had no cheat days. Usually I have cheat days, but this time I had no cheat days and I had to make sure I ate everything healthy. I was also watching videos online about swimming and techniques and I was really focussed.
“I have to try and keep disciplined and organised, and I have learned techniques about keeping balanced,” added Lara. “So when I say discipline, I mean saying no to temptation, I mean saying no to hanging out with friends, saying no to junk food, saying no to social media, and organising my time well and making sure that everything is organised, and ensuring that everything is how it’s supposed to be. I wake up very early in the morning and then I go for swimming. It’s sometimes for one hour, sometimes for two, depending on what we are doing, and then gym work, some stretching, and then I go to school. My lunch is healthy – it consists of vegetables, carbs, protein and water.
However, Lara added that she would not have been where she was today without the support of her family, and she said she hopes that more youth will follow in her footsteps.
“My family is very supportive and I think they are very helpful, as well,” she noted. “They say academics come first and swimming comes second, even after becoming an Olympian. Academics is always very important in our family. I feel like when I was younger, I was missing out, but as I got older I realised that swimming is also fun. I train at the national stadium, but I am the only girl training there. Hopefully, if girls see me they will think they can do that, as well.
“I feel there is a responsibility I have now, because the next generation sort of looks up to me now, as a lot of girls have come to me and ask me how I went to the youth Olympics and say that want to be like me,” added Lara. “I get asked a lot of questions and it is really nice, because I feel the need to help them. It’s super cool because I love helping them and it is really nice.
“There’s actually a banner up at my school, and I was really thankful for that. Everyone is super nice and they are all supportive. “I am very honoured and so happy that I have the privilege to represent Oman,” Lara said.
“I would like to thank the Oman Olympic Association and the Oman Swimming Association for this, and from the other side, I am hopeful that one day there will be more girls than guys on the Omani national swim team.”