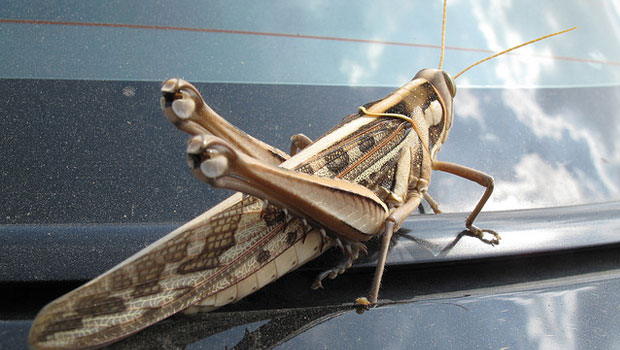 Muscat: Oman is all set to combat swarms of desert locusts coming from Yemen, which will possibly arrive in the spring breeding areas in the northern parts of the Sultanate, according to Mahmoud Al Nabhani, director of crop protection at the Ministry of Agriculture and Fisheries (MAF).
“Such insects pose a threat to agriculture as each female locust can lay 300 eggs,” Al Nabhani said, adding that swarms of locusts could also cover a distance of 100 to 200 kilometres in a day and eat corps double their body size.
Desert locusts in Yemen, where conflict is severely hampering control operations, are posing a potential threat to crops in the region, the Food and Agriculture Organisation (FAO) announced recently. Al Nabhani also said the locusts’ outbreak could be attributed to the conflict in Yemen.
“Earlier, the authorities in the neighbouring country were able to combat the swamps before they could reach farther areas,” he stated. “However, the Locust Combat Centre in cooperation with MAF has deployed manpower and latest technology in preparation for the situation,” said Al Nabhani, adding that the swarms are heading towards the interior parts of Yemen.
Groups of juvenile wingless hoppers and adults, as well as hopper bands and at least one swarm had formed on the southern coast of Yemen in March, where heavy rains associated with tropical cyclones Chapala and Megh fell in November 2015.
FAO is currently mobilising support in order to respond to the situation. Nevertheless, as survey and control operations are presently limited by the lack of security, the population of locusts is expected to increase further, giving rise to more adult groups and swarms that are likely to move along the coast and into the interior, possibly reaching spring breeding areas in central Saudi Arabia, northern Oman and southeast Iran, the FAO reported.
“These countries should take the necessary precautionary measures,” said the statement.
Technical teams
FAO is assisting technical teams from Yemen’s Ministry of Agriculture and Irrigation for conducting field survey and control operations in infested coastal areas, as part of the agency’s continuing support for the country’s locust control efforts. In Northwest Africa, hundreds of small hopper bands formed in the southern part of the Western Sahara in southern Morocco and hopper groups formed in adjacent areas of northern Mauritania, according to FAO’s Locust Watch.
Control operations
Ground control operations are in progress in both areas, having treated 5,000 hectares (ha) in Morocco and nearly 700 ha in Mauritania during March.
Two aircraft are currently on standby in southern Morocco. During April, adult groups and perhaps a few small swarms could form and move to spring breeding areas south of the Atlas Mountains in Morocco and Algeria. Strict vigilance is required in all areas.