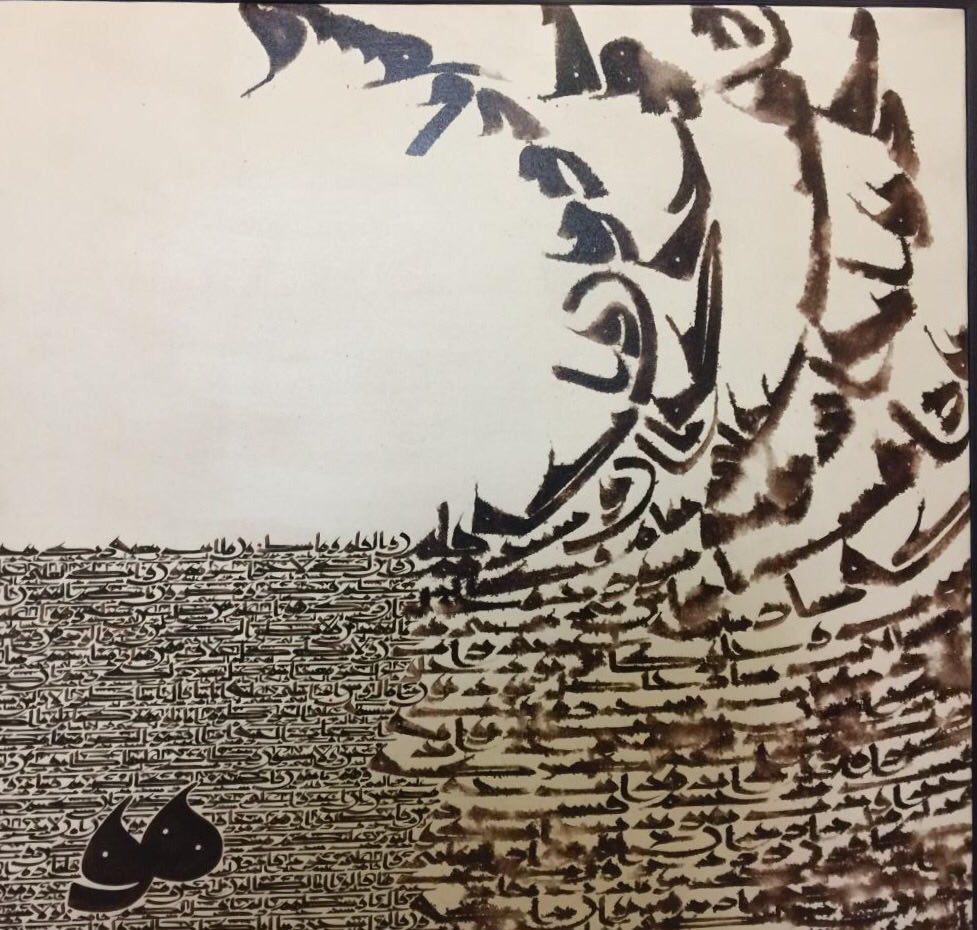 One of Iran’s most gifted calligraphers is exhibiting some of her masterpieces at the Bait Muzna Gallery as part of a new exhibition. ‘Creating A World’ by Azra Aghighi Bakhshayeshi will offer art lovers and enthusiasts the opportunity to have a glimpse of contemporary Persian calligraphy for the first time in Oman. Reflecting on her work, Aghighi Bakhsayeshi described her artistic pieces as being like prayers. “For me, each work is like a commission. But the one making the commission is God,” the native of Qom told the Times of Oman in an exclusive interview.
**media[972339]**
Aghighi Bakhsayeshi comes from a long-line of calligraphers and represents the fourth generation of her family to take up the artform, a line that began with her maternal great-grandfather Mirza Karim Khoshnevis.
“I started at the age of 12. It was in me. My father also encouraged me a lot,” she said, reflecting on a career that began more than three decades ago.
“I was very playful as a child. I always wanted to go play and used to pay attention to other things. But my father was there, constantly encouraging me to focus on my work. At the age of 18, I graduated from a school of calligraphers. I wanted to do something different, to innovate in my style. Calligraphy is disciplined art, but I wanted to do something more creative than the norm.”
Her playfulness as a child evolved into a desire to innovate and break free from the rigidness of traditional calligraphy.
**media[972344]**
“I had a vision that I wanted to make some changes to classic calligraphy and had to prepare myself by going to graphic school and gain a better understanding of letters and lettering so that I could be more playful with my work.”
Aghighi Baksayeshi’s desire to learn led her to study under the acclaimed calligrapher Ustadh Nasrullah Afjai.
“He was generous with his time and taught me everything he could teach. Before knowing Ustadh Afjai, I wasn’t courageous enough to do big works. My teacher told me ‘you’re capable, go, do the big works’.”
That encouragement helped propel her to the next level, a rise that would impress even her teacher, one of Iran’s most famous artists in his own right.
“I had a solo exhibition in Iran last week and Ustadh Afjai came. A journalist asked him, ‘what makes Aghighi’s work special’. He said, ‘patience, perseverance and hard work,’”
His words highlight the challenges Aghighi Baksayeshi has overcome to stand at the summit of a male-dominated world.
“At the beginning it was difficult,” she said, reflecting on the difficulties she faced as a female artist.
**media[972340]**
“But I realised that I can be a good calligrapher and that being a woman is not an obstacle. I had the passion to prove that woman are capable and can do it.”
She found another pillar of constant support and encouragement in her husband.
Today, Aghighi Baksayeshi’s career has taken her around the world, with her work being a part of prestigious collections such as the British Museum, the Qatar Royal Collection, and the Islamic Arts Museum in Malaysia.
Like any master artist, Aghighi Baksayeshi’s work stands out for her expressive creative impulses, reflected in the intricate designs she creates to transform words into patterns as well as the deep sense of thought and messaging that pervade every piece.
**media[972345]**
One, for example, depicts Makkah, and all the verses of the Holy Quran pilgrims recite as they circumambulate the Kaaba. The pilgrims, represented by the prayers they recite, appear almost like prayer beads flowing around Islam’s holiest sanctuary.
It is that contemplative side she hopes audiences in Oman are left with.
“I put a lot of thought and heart into my work. I just hope when people come and see my art they leave with the same good energy and ideas I put into it. My work is not only beautiful but reflective. It’s like reading a book, I want it to have an effect.”
Audiences can catch a glimpse of her work as part of Bait Muzna’s ‘Creating the World’ exhibition, which will conclude on 28 December 2018.
Bringing Aghighi Baksayeshi to Oman has helped reinforce Bait Muzna’s role as a pillar of contemporary art in Oman. Since its launch in 2000, the gallery has welcomed many of the most prestigious artists in the world, offering them a premier space to display their works in Oman. Bait Muzna’s work has also provided artists in Oman with the opportunity to learn from some of the art world’s most acclaimed artists through exhibitions, workshops, and artistic sessions.
Creating the World will not be the only exhibition awaiting visitors in December, with ‘Letting the Light In’ by Peter Hayes extended to 20 December 2018 due to popular demand. The exhibition features sculptures from the legendary British artist.