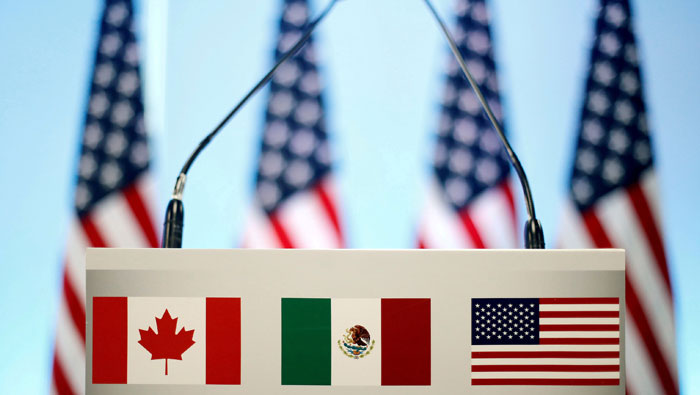 Washington: US President Donald Trump said on Saturday he will soon notify Congress that he plans to end the NAFTA agreement with Mexico and Canada in favour of a new regional trade deal, setting up a potential clash on Capitol Hill.
Trump, traveling home from a G20 summit in Argentina, told reporters aboard Air Force One that he would give formal notice to Congress on "terminating" NAFTA "within a relatively short period of time."
That would trigger a six-month waiting period before the US could leave the pact — during that time, US lawmakers would be asked to approve the new deal signed on Friday with America's neighbours.
Trump says the new pact — known in Washington as the US-Mexico-Canada Agreement (USMCA) — will help US workers, especially in the auto industry, and better safeguard intellectual property.
"We get rid of NAFTA. It's been a disaster for the United States," said Trump, who insisted that the North American Free Trade Agreement, in place for nearly a quarter-century, was a killer of American jobs.
"That'll be terminated so Congress will have a choice of the USMCA or pre-NAFTA, which worked very well," the Republican president said.
The signing of USMCA was a victory for Trump, following months of tense and difficult negotiations with Ottawa and Mexico City.
Trump said on Friday that he did not foresee a problem with getting congressional approval, but some Democrats — who will control the US House of Representatives as of January — have expressed skepticism.
Nancy Pelosi, the frontrunner to regain her position as Speaker of the House, on Friday called the deal a "work in progress."
"What isn't in it yet are enough enforcement reassurances regarding workers" and the environment, she told a press conference.
"This is not something that we have a piece of paper where we can say yes or no to it," said Pelosi, who added that Mexico had not yet passed a law on wages and working conditions.
The new deal also requires legislative approval in Canada and Mexico.