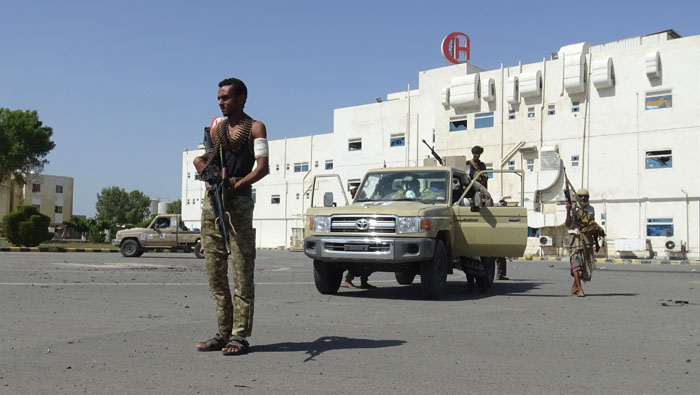 Dubai: Renewed violence in Yemen’s vital port city of Hodeida has left 10 fighters dead, despite a UN push for peace talks, an official and medical sources said on Saturday.
An official with pro-government forces said fighting erupted in the east and south of the Red Sea city on Friday, while Houthis on their television channel referred to an exchange of tank fire.
Intermittent clashes continued on Saturday, Hodeida residents said by phone. The violence follows a visit to the city last month by UN envoy Martin Griffiths to press for talks aimed at ending the war which has pushed Yemen to the brink of famine.
Hodeida port is held by the Houthis and serves as the entry point for nearly all of the country’s imports and humanitarian aid.
A Saudi-led coalition supporting Yemen’s internationally-recognised government launched an assault to take Hodeida in June, but its forces had largely suspended the offensive amid intense diplomatic efforts.
Sporadic clashes have however continued since a fragile truce began on November 13.
Medical sources on Saturday confirmed the bodies of eight rebels had been transferred to hospitals. Two fighters with pro-government forces were also killed, according to a medical source at a hospital in an area held by the loyalists. The escalation comes just days ahead of proposed peace talks hosted by Sweden, which have been backed by both the coalition and rebels.
UN Secretary-General Antonio Guterres, however, has played down the early December schedule and said he hoped talks would start “this year”.
“But, as you know, there have been some setbacks,” he said on Thursday. Previous talks planned for September in Geneva failed to get underway as the Houthi delegation never left the Yemeni capital Sanaa, arguing that the United Nations could not guarantee their safe return.
If conditions are met, all sides have in principle agreed to attend the talks in Sweden, including the government of Yemen’s internationally-recognised president, Abedrabbo Mansour Hadi.
Meanwhile, UN aid chief Mark Lowcock warned on Saturday that Yemen was “on the brink of a major catastrophe”, as the world body pushes for peace talks in the impoverished and war-wracked country.
His comments came after renewed deadly clashes between Houthi rebels and pro-government forces in the Red Sea port city of Hodeida, vital for the flow of humanitarian aid.
Humanitarian crisis
“Yemen is on the brink of a major catastrophe,” Lowcock said, as he wrapped up a visit to the country.
He said conditions had deteriorated alarmingly since his last visit in October 2017 to Yemen, which the United Nations has termed the world’s worst humanitarian crisis.
“In Aden, I met emaciated children so malnourished they could barely open their eyes,” Lowcock said in a statement.
“Humanitarian assistance helps many of these children recover. But I also heard heartbreaking stories of children relapsing again and again because their families simply can’t afford food or proper medical care,” he said. Lowcock reiterated the UN’s readiness to play a role to ensure that the rebel-held Hodeida port, a key entry point for imports and aid, can remain open.