Jobs in Mexico replace American dream for some caravan migrants 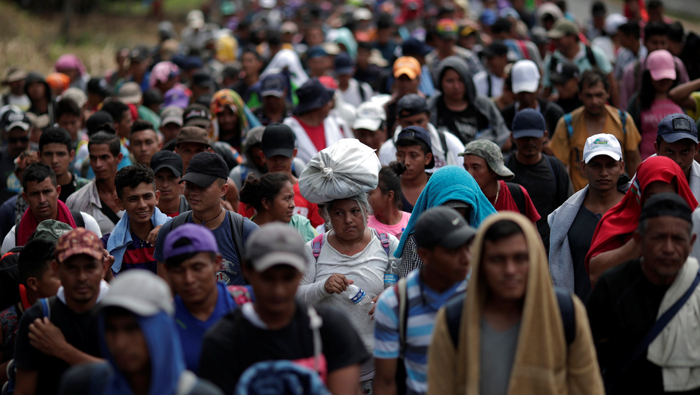 Tijuana(Mexico): Stranded on the US-Mexican border with little hope of entering the United States, thousands of people from a migrant caravan are letting go of their American dream and settling on a Mexican one.
Under a work programme set up by the Mexican government, 2,250 migrants in the northern border city of Tijuana -- out of the roughly 6,000 who trekked here in the caravan from Central America -- have signed up to get jobs, visas and social security benefits in Mexico.
The programme is designed to induce them to stay here, rather than press on to the United States, where wages are higher but where President Donald Trump has made his hostility toward the migrant “invasion” plain.
But it is a long process: just 15 migrants have actually been employed so far.
Denny Guevara, a 26-year-old Honduran man, is one of them.
“It turns out this was my destiny,” he says, smiling ear to ear as he carefully arranges bottles of honey on the shelves of a Tijuana supermarket, the Smart & Final.
“What I wanted was a better life, to escape the violence in my country, an opportunity to find work.”
He managed to do that without ever reaching the United States.
In the week since he arrived in Tijuana, which sits across from San Diego, California, he has managed to find a job and get residence papers.
“My plan is to stay here. I think I’ll do well,” he says.
Looking smart in his navy blue uniform, the former bank employee says he still can’t get over the seemingly endless abundance of products on Mexican supermarket shelves, which look more like American ones than Honduran.
“This is still all pretty new. I’ll have to get used to it little by little,” he says.
His next dream: to make enough money to send for the wife and three children he left behind in Honduras.
First, he needs to find a place to live. He is currently staying at the shelter set up for the caravan, where “there’s nowhere to wash your clothes and you have to stand in a long line to shower,” he says.
Yansy Lopez, a 23-year-old Salvadoran woman, is pushing her crying baby in a stroller as she snakes through the line for breakfast at the shelter.
There are hundreds of people ahead of her, and she is in a hurry: she needs to get to a job interview.
“They’re offering me 12 hours a day packing boxes, from Monday to Saturday, for 2,000 pesos (about $100) a week,” she says enthusiastically.
She did the same job back in El Salvador for a US clothing brand, but left after members of one of the country’s notoriously violent gangs tortured and killed her stepson. She made the same salary there, plus bonuses.
“I was the fastest, I packed more boxes than anyone,” she says.
“If they give me the job here -- well, I’ve done it before,” she adds with a smile.
Edwin Garcia, a 27-year-old auto mechanic from Honduras, has also found work in the same supermarket as Guevara, stacking fruits and vegetables in symmetrical pyramids in the produce aisle. “I’d never had a decent job before,” he says.
He left Honduras because he was too poor to even buy milk for his baby daughter, he says.
His new job “is like a dream that I haven’t woken up from yet. I’m trying to take it all in... It’s a beautiful thing to feel like I’m integrating into (Mexican) society.”He says he is still traumatized by the trek to the border.
“I walked a lot of the way. I felt like giving up in Mexico City. ‘I can’t go on,’ I said to myself,” he says, choking back tears.
“But I looked at my pictures of my daughter, and that made me want to try. And here I am.”