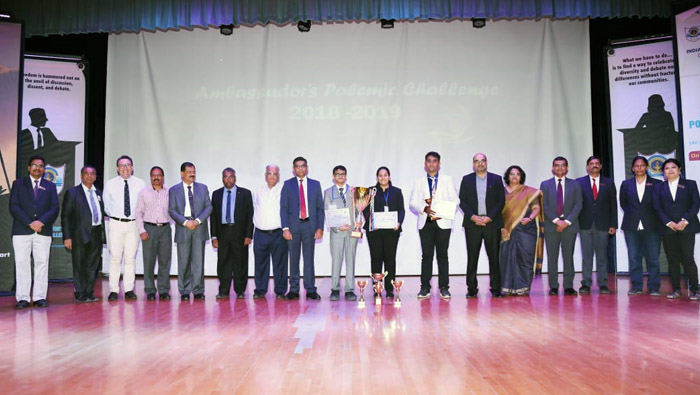 Muscat: This year, the Indian School Oman Board’s annual inter-school debate competition was hosted by the Indian School Al Wadi Al Kabir on November 19, 2018. The debate was themed on the 150th birth anniversary of Mahatma Gandhi and the topic was “Has India been successful in its adherence to the principles of self reliance”?
Munu Mahawar, Ambassador of India to the Sultanate, was the Chief Guest. Also present on the occasion was Dr. Baby Sam Samuel, Chairman, Board of Directors, Indian schools in Oman.
Some 15 Indian schools across the Sultanate participated in the competition; each team comprised two members, one speaking for and the other against the motion. The debate was adjudicated by Luis Silveiro, Sunil Sadasivan, and John Moshy.
In his address to the gathering, Mahawar lauded the role of Indian schools in providing quality education to the children of the Indian diaspora in Oman. He gave away prizes to the winners of the competition.
Ritu Andrews Machilath and Anirudh Govil, both of Indian School Al Ghubra, were declared the Best Speaker and the First Runner-up, respectively.
Darin Carvalho of Indian School Salalah was announced the second runner-up. Indian School Al Ghubra students were declared the best team and lifted the “Ambassador’s Polemic Challenge” trophy for the year 2018.