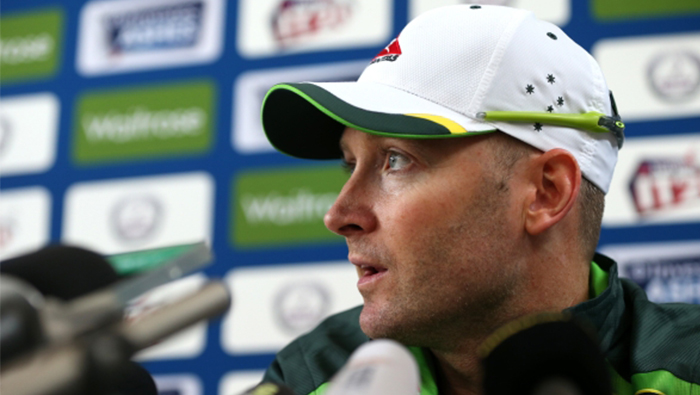 Sydney: Former Australian captain Michael Clarke has angrily rejected suggestions he helped create a culture that led to the ball-tampering scandal, slamming a leading broadcaster as a "headline-chasing coward".
The war-of-words stems from comments Clarke made on Wednesday criticising attempts to improve the cricket team's image in the wake of the cheating row in South Africa this year, insisting they "won't win a game" without their infamous abrasive attitude.
"Australian cricket, I think, needs to stop worrying about being liked and start worrying about being respected," he told commercial radio.
"Play tough Australian cricket. Whether we like it or not, that's in our blood."
Long-time Clarke rival Simon Katich blasted him for "once again... missing the point", saying the team were caught "blatantly cheating" and that "our behaviour is a big part of that".
Current skipper Tim Paine, who has advocated a more nice-guy approach, also weighed in, saying the team's friendlier way of playing was not so much about being liked, but knowing when to ease up on the aggression.
But it was the reaction from Melbourne-based sports broadcaster and writer Gerard Whateley that sparked a scathing Instagram response from Clarke late Wednesday.
"Clarke's interpretation of the predicament the Australian men's Test team finds itself in is breathtaking," said Whateley.
"That he would continue to rely on the line — the fiction his and subsequent teams used to excuse all manner of boorish behaviour — might be the single greatest piece of nonsense over the past nine months."
Clarke said he would not stand by while "my leadership, my integrity" were attacked, insisting his conduct as an honest and rules-based captain had never been questioned.
"For Gerard Whateley to insinuate that I am responsible for the ball-tampering issue makes him nothing more than a headline-chasing coward," Clarke wrote.
"If you think that the current No.1 team in the world in cricket right now puts being liked as of higher importance than being respected and playing to win inside the rules of our game than you're as delirious as you are ill-informed."
The cheating scandal involved Australian players using sandpaper to alter the flight of the ball in a Test match against South Africa last March in Cape Town.
Coach Darren Lehmann quit in the wake of the controversy and then-captain Steve Smith, deputy David Warner and batsman Cameron Bancroft received lengthy bans.
The affair also claimed the scalps of Cricket Australia chief executive James Sutherland and chairman David Peever.
The Australians have endured a dire run of form since losing 17 matches out of 24 in all formats, ahead of a home Test series against top-ranked India starting on December 6.