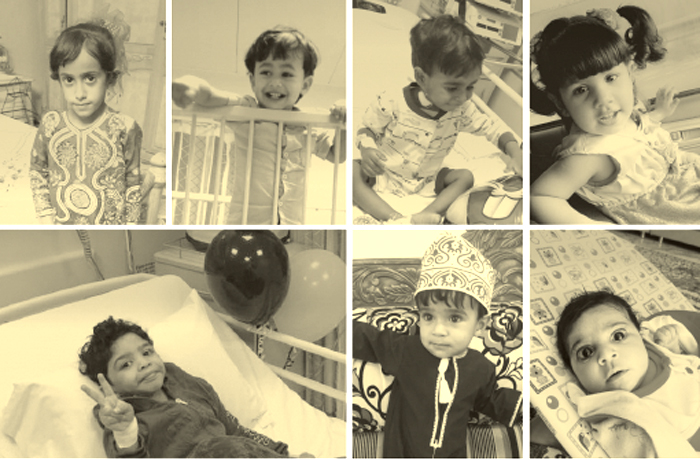 Hours of anxiety, fear and despair turned into hope and happiness for parents of those children who were undergoing a major heart surgery at the Royal Hospital. Parents of Mohammed, Hala, Danah, Sultan, Osama, Rakan and Ashgan share their experiences.

Lamya Al Harthi, whose son Mohammed recently underwent heart surgery at Royal Hospital, was overwhelmed with joy and relief after his surgery ended successfully. “A hole was discovered in my son’s heart when he was three years old. We knew that there were other children with a similar condition and that the hole usually heals after a short period of time. But in Mohammed’s case, the hole was too large and needed treatment either by a catheter or surgery,” said Lamya.
Her son was one among the 41 children who recently underwent open-heart surgeries performed by a team of more than 100 healthcare professionals. They worked tirelessly from dawn to dusk and used four operation theatres to help treat the children under a scheme called Accelerating Open-Heart Surgery for Children at the Royal Hospital’s National Heart Centre.
The programme aims to accelerate open-heart surgery for children who suffer from congenital heart defects. The Sultanate’s surgeons joined forces with specialists from Australia to conduct the surgeries.
Lamya, while expressing gratitude to the staff at Royal Hospital, said: “The hospital staff were very helpful, they supported us emotionally and always kept us informed.”
Lamya was able to leave the hospital with her son three days after the surgery. She added: “My son’s operation took three to four hours. After surgery, he woke up the following day and began to respond. On the third day, he started moving and was discharged from hospital. I would also like to thank Dr Alaa Lawati who performed the surgery. He often visited us to reassure us over Mohammed’s condition.”
Hala’s mother had labour pains for 12 days before Hala was born. Five days after her birth, the family discovered she had a hole in her heart. “The news was a shock to me and I strongly rejected the idea of surgery for the fear of losing my daughter because the process is complicated and takes more than eight hours,” she said.
Hala’s parents sent medical reports to a number of private hospitals, both outside and in Oman, in search of a solution, and they were advised to perform the operation at Royal Hospital.
“Last Eid, my daughter’s condition worsened, so I decided to do the surgery. My husband and my family supported me and tried to reassure me that everything would be fine. After meeting Dr. Alaa, I was more confident,” Hala’s mother recalled.
An eight-hour-long wait outside the operation theatre ended with good news. The operation was successful and Hala was in good health.
Osama Al Shamaki’s mother Zamzam Al Hinai described how she felt during the six-hour wait while her son was undergoing surgery.
Eighteen-month-old Osama was suffering from a heart condition. “We were told that he would have to undergo surgery on the third day of Eid. I was so scared and nervous. I cried and prayed to Allah for his good health,” Zamzam said.
“I would like to thank Dr. Alaa for standing by us, for his kindness and support,” Zamzam added.
“I would also like to thank all the nurses and staff who took care of my son during those five days. God bless them all,” she said.
Naseema Al Hanai, mother of two-year-old Rakan, said: “I tell all mothers not to be afraid. Your sons will be in good health. I was also worried initially but then realised my son was in safe hands. The surgery helped my son a lot. He was able to speak better. I was no longer in a state of constant anxiety and fear like before.”
Though the three-hour-long wait was tough, seeing her son in good health made her forget the entire trauma she had undergone. Ashgan’s family discovered their daughter’s heart ailment when she had a high fever. After a check-up, they were informed that she might have a hole in her heart.
“After the operation, her appetite improved and she could resume her studies like other children,” Ashgan’s mother said.
Danah was the youngest to receive heart treatment. She was only two months old and during this period she had two heart catheterisations, as well as an artery ligament. Her father Darrah Saif Al Jasasi said: “We are now out of the hospital after two months of treatment. Our baby’s health is better and we hope it will improve in the coming days.”
Asia, a mother of seven children, was heartbroken when she found out that her son Sultan had a heart condition. She said: “The doctor was keen to provide a full explanation over my son’s condition and surgery before he went ahead with it; he answered all our questions and that helped reassure us.”
—[email protected]