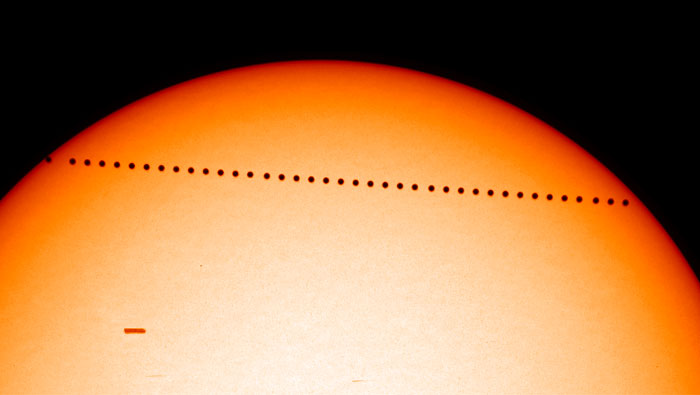 Muscat: People in Oman will be able to observe a transit of Mercury across the Sun on May 9, 2016, Oman Astronomical Society (OAS) said.
The rare event, which takes place 13 times a century, as Mercury comes near to the centre of the Sun, according to OAS.
It will be visible in Muscat governorate before sunset (6:36pm).
“It is never safe to watch the transit without taking special precautions as it can cause damage to eyes,” says Saleh Al Shidhani from the OAS.
He stressed that observers should use telescopes with sun filter to safely enjoy viewing the littlest planet travel in front of the Sun.
According to Al Shidani, the event will be possible to witness in all parts Oman. “We are planning to have a gathering at the Sultan Qaboos Grand Mosque in Nizwa and Bausher to watch the event,” he added.
Mercury will first touch the Sun at 3:11 pm, and then will enter the Sun circle at 3:14 pm.
Oman News Agency (ONA) reported that the liitle planet will cover only 0.6 per cent of the Sun's size.
According to sciencealert.com, the transit of Mercury occurs when Mercury passes between the Sun and Earth, and repeats around 13 or 14 times every 100 years.
This year, the planet will be taking around eight hours to make its glorious way across the Sun.
However, people in Indonesia, Australasia and eastern Asia would not be able to witness the astronomical event.
The last three transits occurred in 1999, 2003 and 2006.