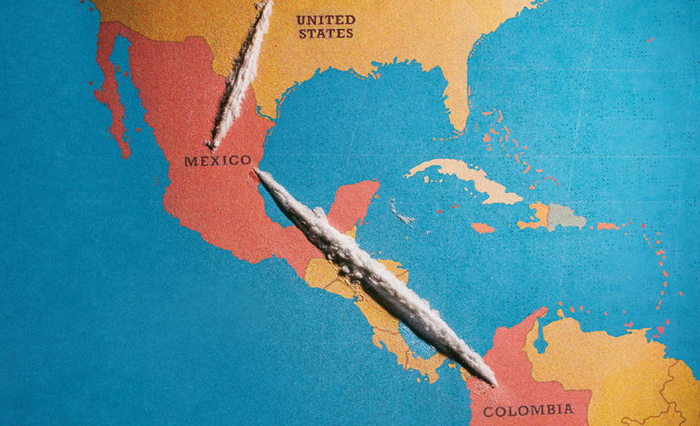 Evil, it is often said, is like a Hydra. Cut off one head, and two others spring forth, in an ever-expanding threat to all that is good and decent in this world. The insidious and nefarious crime lords of Narcos certainly seem to fit that picture.
Let’s pick up where the series has left off, shall we? Smash narco-thriller series Narcos focused initially on the illegal drug trade in Colombia, where the United States’ Drug Enforcement Administration (DEA) were hunting down the South American nation’s crime barons in order to stop the smuggling of narcotics into the States, which brought with it a skyrocketing increase in criminal activity.
The last three seasons of Narcos showed us how DEA agents Steve Murphy and Javier Pena tracked down Pablo Escobar and his infamous Medellin cartel, before putting paid to his rival Cali operatives. Now back in the US, Pena is tending to the crops on his father’s farm near the Mexican border, when he is suddenly flashed an evil grin by a smuggler, who is bringing contraband into the US from just south of the border.
Sent to Mexico is DEA agent Kiki Camarena, whose task it is to cut off yet another head of the narco-hydra, setting the scene for Narcos: Mexico. Originally billed to be the fourth series in the sensational Netflix original hit, the show will instead be developed as a show that run parallel to the original.
Narcos: Mexico is out on November, 16, 2018, and is available to exclusively watch and stream on Netflix, the home of the hit crime series.
The ongoing drug war in Mexico is common knowledge to anyone who follows the news these days, having left in its wake a bloody swathe of death and destruction, the likes of which have to be suffered by hundreds of thousands of innocent people who have little or no association to the conflict, apart from living in areas where the lawful and the lawless clash. This new series explores the origins of Mexico’s long-running drug war, and plots the rise of the Ciudad Guadalajara cartel, which rose to power in the 1980s.
Much like Pablo Escobar did in Colombia, the modus operandi of the Guadalajara cartel was simple – instead of fighting amongst each other, would it not be better to form a unified front, and take a share of the profits? All of those involved in the running of the drug cartel would be socios – partners – and they could then focus on shipping their product to world markets, while raking in the millions with little bloodshed between them.
Kiki Camarena – who is played by Michael Pena of American Hustle, Ant-Man, The Martian and NYPD Blue among others – is tasked with hunting down Felix Gallardo, the head honcho of the Guadalajara cartel and brains behind the drug empire he is about to set up in Mexico. Played by Mexican actor Diego Luna – best known for playing Enrique Cruz in The Terminal and Cassian Andor in Star Wars: Rogue One – Gallardo may be suave and sassy on the surface, but those qualities only hide far more sinister ones – a ruthlessness to win at all costs and an inability to tolerate failure because of the sharp pitfalls it could bring.
Kiki moves to Mexico with his recently-wedded wife and his young son, expecting his time down south to be an easy jaunt to justice, but as is the case with most DEA agents who embark overseas on assignment, he finds himself facing more than he could ever bargain for.
Caught in an increasingly inextricable web of lies and deceit, Kiki finds himself sitting on a social powder keg that is just waiting for the spark to be lit to go off. He does, of course, expect to play a role in this vast maze of crime, conflict and corruption, but little does he know that he is the fire and tinder that will send the drug war in Mexico sky-high. An intriguing watch, if there ever was one.
– [email protected]