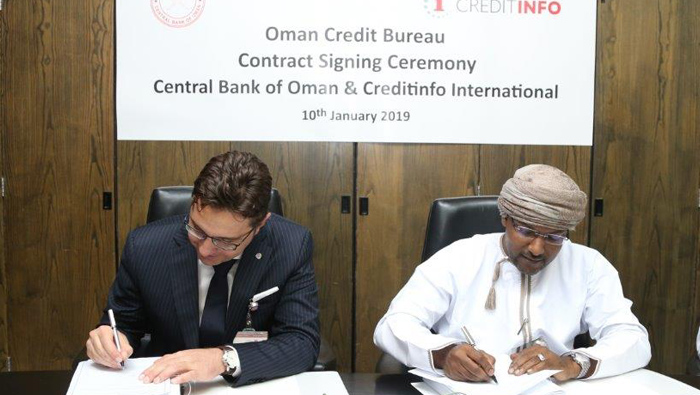 Muscat: The Central Bank of Oman (CBO) and Creditinfo signed an agreement at the CBO head office as part of the development of a full-fledged independent credit and financial information bureau called Oman Credit Bureau.
Tahir bin Salim Al Amri, Executive President of the CBO, signed the agreement on behalf of the CBO, while Stefano Stoppani, Chief Executive Officer of Creditinfo Group, signed the agreement on behalf of Creditinfo Group.
According to the terms of the agreement, Creditinfo Group is responsible for providing the hardware equipment, the software, consultancy services, and substantive support for the bureau.
“The signing of this agreement to establish the bureau is part of the CBO's 2019-2021 strategy,” said Al Amri.
“The project is part of the National Programme for Enhancing Economic Diversification (Tanfeedh), in coordination with the Implementation Support and Follow-up Unit (ISFU). The bureau, once launched, will serve as an integrated national credit and financial information centre in the Sultanate, which inevitably will help improve the Sultanate’s ranking in the sub-index of the Overall Country Ease of Doing Business Ranking issued by the World Bank,” he added.
“Central Bank of Oman has finalised the draft of the legal framework for the bureau, which will regulate its functions and expand its scope of services in line with the best international standards. The project will be delivered over three phases of 12 months each; phase1 is planned to be launched by the end of this year,” said Aadil Khalifa Al Saadi, the Project Manager and Manager of the Banking Credit & Statistical Data Department.