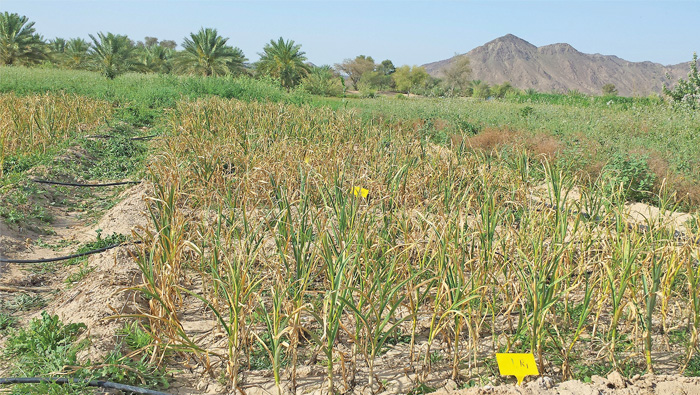 Muscat: Only 7 per cent of available land in Oman is actually arable and can be farmed, according to a report of the Ministry of Agriculture and Fisheries.
The availability of land for planting has shrunk due to soil salinity. Currently, arable land (which can be planted on) is 7.07 per cent of the total land space in the Sultanate.
The Ministry of Agriculture and Fisheries is working to reverse these affects on land through scientific experiments meant to increase fertility and yield.
According to a report by the ministry, “Some 7.07 per cent of the land in the Sultanate’s 31.43 million hectares is arable, and this ratio has shrunk due to land salinity, one of the greatest challenges to the Sultanate’s agricultural section today.”
This means that of the Sultanate’s 314,300 kilometres squared, only 22,221 kilometres squared can field plants well.
However, the ministry is currently attempting to combat these issues through research.
The statement said, “The Directorate General of Agricultural and Livestock Research ran field experiments, such as watering tomatoes 50 per cent of the time with salt water, proving that fresh water can be saved, making tomatoes economically feasible.”
“Another experiment involved fertiliser and sweet peppers, which proved that more fertiliser did not actually improve economic yield. This can stop farmers from wasting fertiliser.” A similar experiment was carried out on local garlic, which proved the same.
Soil in Oman is considered a resource, such as fresh water.
The statement added, “Fertile soil in Oman is considered a limited resource, as sandy soil and sandy loam dominate the Sultanate. This sort of soil has high aeration and is unable to hold water. Moreover, Oman’s soil has a low amount of organic matter, which is important to improve soil.”
This sort of soil cannot be properly treated with organic fertiliser unless it is added in high amounts. Because of this, adding inorganic fertiliser, in addition to organic fertiliser can be necessary.