British voters would now back staying in the EU, poll shows 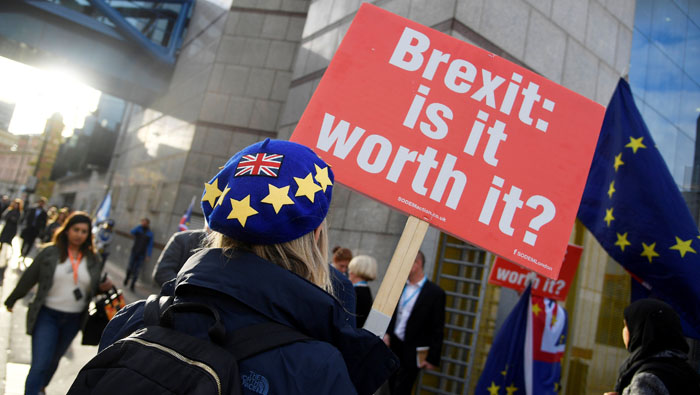 London: Britain would now vote to stay in the European Union as more young people and those who did not bother to vote in the shock 2016 referendum would now vote against Brexit, a survey of 20,000 voters showed.
With just five months to go until the United Kingdom is due to leave the EU on March 29, voters now would back staying by 54 percent to 46 per cent, the study by the Survation pollster for Channel 4 showed.
Prime Minister Theresa May has repeatedly ruled out a rerun of the referendum, though former prime ministers Tony Blair and John Major have called for another vote, and 700,000 people marched in London last month to demand one.
British election expert John Curtice said the outcome of any new vote would still depend on who turned out. “What lies behind this actually is an awful lot to do with turnout,” he said, adding that leave voting areas were seeing swings even though not many leave voters, especially older voters, were actually changing their minds.
“The swing towards remain has been strongest among younger voters. It’s virtually absent among older voters.”
Previously, most opinion polls have shown only slight changes in public opinion since the Brexit vote. Many surveys ahead of the vote incorrectly predicted that the United Kingdom would vote to stay in the club it joined in 1973.
In the June 23, 2016 referendum, 17.4 million voters, or 51.9 percent, backed leaving the EU while 16.1 million, or 48.1 percent, backed staying.
Brexiteers argue that May’s predecessor, David Cameron, said during the campaign that the decision would be final.
But those who back a “People’s Vote” say May’s vision for Brexit was not on the ballot in 2016, so the public should have a new say.
The poll showed sentiment shifting in whole cities, including Birmingham, Luton, Nottingham, Slough and Southampton, all now solidly “remain” having originally voted leave. Sunderland, a city whose early results of a strong leave vote rocked sterling on referendum night, has seen support for leave fall by more than 10 points, with just 50.6 per cent now backing departure from the bloc.
Survation interviewed 20,000 people online between October 20 and November 2, which it said was the largest independent poll since the referendum.
London and Brussels have yet to secure an agreement on the terms of the UK’s departure to avoid a disruptive “no deal” scenario.
May’s approach, seeking free trade in goods with the EU while accepting some of its regulations, has been criticised by both supporters and opponents of Brexit.
The Survation poll found that 33 per cent of people would reject a deal reached by May, compared to just 26 per cent who would accept it. Should May be unable to agree a deal by March 29, 36 per cent said Britain should leave without a deal, 35 per cent said it should stay in the EU and 19 per cent said departure should be delayed until an agreement is reached. If May did agree a deal, 43 percent would support a referendum to choose between accepting the deal or remaining in the EU, compared to 37 per cent who would oppose a vote, the survey found. - Reuters