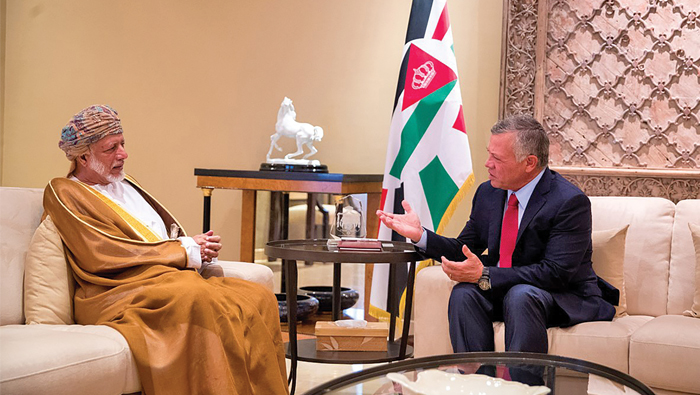 Amman: King Abdullah II bin Al Hussein of Jordan received, yesterday, a written message from His Majesty Sultan Qaboos bin Said on the bilateral relations between the two countries.
The message was conveyed by Yousuf bin Alawi bin Abdullah, Minister Responsible for Foreign Affairs when he was received by King Abdullah. During the meeting, Alawi conveyed HM’s sincere greetings and wishes of good health to king Abdullah and the his country’s people further progress and prosperity.
On his turn, King Abdullah asked the Minister to convey his sincere greetings and wishes of good health to His Majesty the Sultan and the Omani people further progress and prosperity.
King Abdullah stressed further enhancement of the brotherly relations between the two countries for the interest of the peoples of the two countries.
The meeting also dealt with the Palestinian cause and peace negotiations between the Palestinian side and the Israeli side. The meeting was attended by Minister of Foreign Affairs and Expatriates, Advisor to King Abdullah, director of his office and the Sultanate ambassador to Jordan.