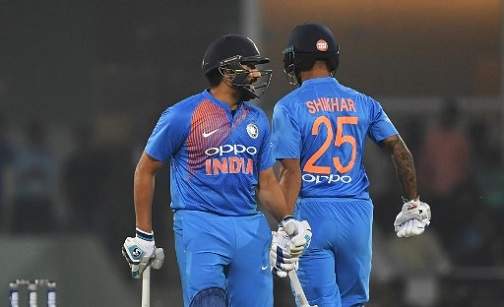 LUCKNOW, India: Skipper Rohit Sharma smashed his fourth Twenty20 international century — the most by any batsman in the format — to propel India to 192 for two against West Indies on Tuesday.
Sharma made an unbeaten 111 off 61 deliveries to give India an imposing total after the hosts were put in to bat first in the second match at Lucknow's newly built stadium.
India lead the three-match series 1-0.
The big-hitting Sharma put on 123 runs with opening partner Shikhar Dhawan, who made 43, to pummel the West Indian bowling after paceman Oshane Thomas started with a maiden over.
Sharma, who now has 2,203 runs in 86 matches, became India's highest run-scorer in T20s after surpassing regular captain Virat Kohli (2,102 runs) during his red-hot knock.
He is now the second highest scorer in the world behind New Zealand's Martin Guptill, on 2,271 runs.
The right-left combination of Sharma and Dhawan, who surpassed 1,000 T20 runs during his 41-ball knock, smashed the balls to all parts of the huge ground before the first wicket fell in the 14th over.