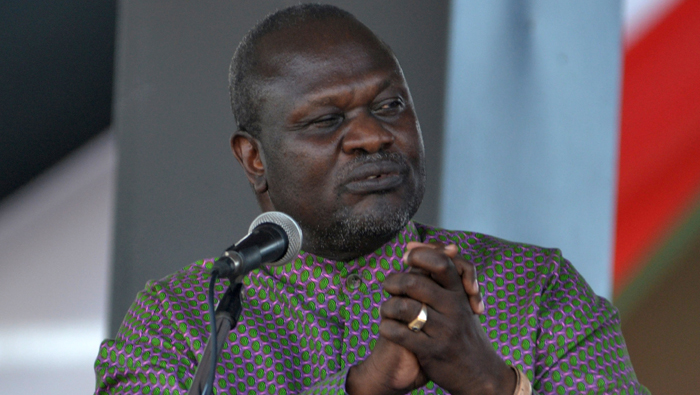 Juba: South Sudan rebel leader Riek Machar returned to the capital Juba on Wednesday to celebrate a peace deal, more than two years after fierce fighting erupted in the city and forced him to flee the country.
Machar flew in with his wife and a small retinue but none of his troops - then met his long-time rival, President Salva Kiir, and a line-up of regional leaders who have spent years pressing the two men to end their civil war.
"We need peace," Machar told thousands of people who gathered at a ceremony marking the accord that he, Kiir and other groups signed last month. "We really pray that this peace agreement holds this time," said 27-year old Juma Khamis in the crowd. Regional and Western powers alike have been exasperated by a string of failed ceasefires and deals.
The world's youngest nation plunged into conflict in 2013 after Kiir sacked Machar as vice president. Troops loyal to both men clashed in the capital that December and ethnically charged fighting soon spread across the state, shutting down oil fields, forcing millions to flee and killing hundreds of thousands of people.
There have been sporadic incidences of fighting since the latest agreement was signed, but violence has largely died down.
Kiir hosted Wednesday's ceremony near the mausoleum of national hero John Garang - the same spot where the country celebrated its independence from Sudan in 2011 after decades of north-south war fuelled by oil, ethnicity and religion.
Leaders from Uganda, Ethiopia, Sudan, Egypt and Somalia looked on as traditional dancers entertained the crowds. Machar fled to neighbouring Democratic Republic of Congo in 2016 after fighting broke out again in the capital, wrecking an earlier peace deal and killing hundreds.
He later travelled to South Africa, where he was held under house arrest until earlier this year. Under pressure from governments in East Africa and from United Nations and Western donors, Machar's group, other rebel factions and the government last month signed a peace deal, under which he will again become vice president.