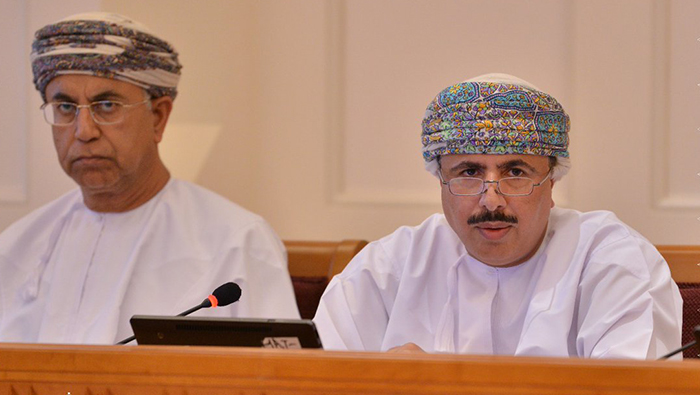 Muscat: The Shura Council has held a joint meeting between the members of the Youth Human Resources Committee and His Excellency Sheikh Abdullah bin Nasser Al Bakri, Minister of Manpower, to follow up on the employment of the national work force in the private sector.
Present at the meeting were His Excellency Khalid bin Hilal Al Ma'wali, President of the Council, and His Excellency the Chairman and members of the Youth and Human Resources Committee, Members of the Council's Bureau and His Excellency the Secretary-General of the Council.
During the meeting, the minister reviewed the labour force indicators in the private sector, providing a detailed explanation on the progress of the program to provide job opportunities to Omani citizens, through data and figures, which were reviewed by the committee. A number of challenges were also addressed in the national workforce program, including the concentration of the majority of available jobs at levels that only require a general education diploma rather than university qualifications.
The largest number of job seekers were shown to be female, and it was also noted that a significant number of jobseekers are less likely to have access to opportunities offered to them, as well as there being other challenges, such as those related to low wages, benefits and the work environment in the private sector.
Mohammed bin Ahmed Al Busaidi, Chairman of the Youth and Human Resources Committee, said that the meeting came following the desire of the committee to follow up on the situation of job seekers, particularly with regard to the job opportunities that were provided as part of the 25,000 job opportunities.
Al Busaidi praised the ministry's efforts in providing job opportunities and coordinating with the private sector to attract the Omani workforce to work in various sectors.
He pointed to the need to provide figures regarding the size of the workforce operating in the private sector on a continuous basis, adding that some employers may not have been assigned their share of the appointment, with this challenge remaining an issue despite the efforts of the ministry to rectify it.
The members also presented a number of solutions and proposals on ways to reduce the number of job seekers, particularly university graduates, stressing the importance of having a clear strategy pertaining to the employment of the Omani workforce and regulation of the labour market.
Their Excellencies also asked what the ministry aimed to do following the end of the first phase of the government plan to provide 25,000 jobs, as well as with regard to training for employees before and after they join the private sector, on top of whether the training is compatible with the needs of the given institution.
In response, the Minister of Labour stressed that the proposals submitted by the Shura Council are welcomed by the competent authorities, calling on the council to develop and submit proposals that are able to be implemented.
He also pointed out that the process of employing job seekers in the private sector is continuing and has not stopped in spite of the challenges. He called on the private sector to exert more effort to take in job seekers and facilitate their employment, in return for the job seeker to accept the opportunities offered so as to minimise the requirement for companies to recruit from the expatriate labour force.
The meeting was attended by Hamad bin Khamis Al Ameri, Undersecretary of the Ministry of Manpower for Labour Affairs, Dr. Yunus bin Khalfan Al Akzmi, Executive Chairman of the General Authority for Manpower Register, Hamda bint Saeed Al Shamsia, Acting Director General of the General Authority for Social Insurance, and a number of ministry officials.