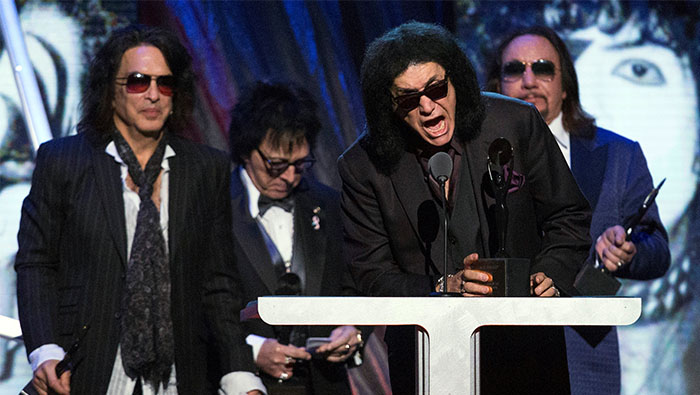 Los Angeles: Members of the rock band Kiss said they are kicking off a farewell concert tour in January because they wanted to say goodbye while they could still deliver the over-the-top performances that have thrilled audiences over a 45-year career.
Known for their makeup, big hair and outrageous costumes, Kiss was among the biggest acts of the 1970s, coming out of the glam rock era with hits including "Rock and Roll All Nite".
"How pathetic and sad would it be to see the band, and you've seen lots of them, (where) you remember their glory days and they're out there a little bit too long," said 69-year-old bassist and singer Gene Simmons.
"We have too much pride and self-respect in us, and too much love for our fans, to not live up to our self-imposed mandate," he added. "You wanted the best, you got the best, the hottest band in the world."
The "End of the Road" tour will start January 31 in Vancouver. It is expected to last two to three years and extend around the world, Simmons said.
"Earth is a big place and we're going to go to every corner," he said.
Kiss has sold more than 100 million albums over its career. It served as a predecessor to 1980s heavy metal acts such as Motley Crue. Kiss currently includes two original members — Simmons along with singer and guitarist Paul Stanley — plus guitarist Tommy Thayer and drummer Eric Singer.
"I guarantee that the people who come that have never seen us before are going to say 'Why did we wait so long?'," 66-year-old Stanley said, "Because this is going to be bombastic, explosive, unapologetic and a celebration of everything we've done."
"The word 'bittersweet' doesn't really enter into it," he added. "For us, it's a celebration. We want to go out on top while we can still do what we do."