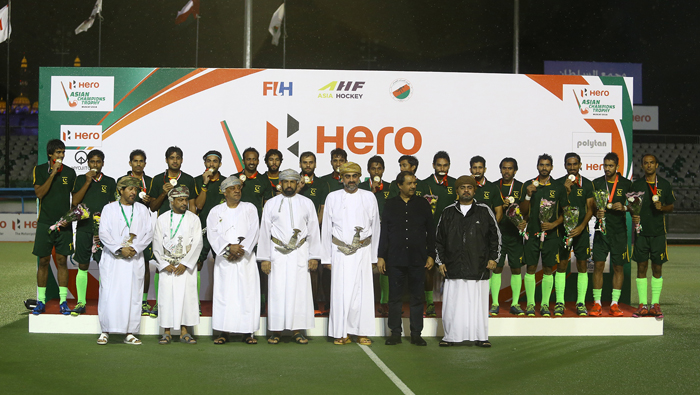 Muscat: Hockey fans are hailing the sporting spirit of the Asian Champions Trophy, which saw both India and Pakistan declared joint winners of the tournament, which recently concluded in Oman.
A match between the two sides was expected to take place on the night of Sunday, October 28, after Malaysia emerged victorious over the Japanese in the 3rd/4th place match earlier that evening, defeating them 3-0 on penalties.
“Pakistan will be enjoying this news as champions,” said Soumya Sarkar, who supported India.
“Bad luck for us that it had to rain this hard today. We all know who was the favourite to win. Shame that there’s no reserve day.” “Congratulations to both of the teams,” added Pawan Manchanda, as Atif Rasool, a Pakistani supporter said, “Congratulations Team Pakistan and Team India. Lots of lives, prayers, support and respect to you from Karachi, Pakistan.”
“Oh man, we waited so long,” added Dinesh Murali Rajendran.“Anyways, we have the World Cup here. Congratulations Team India for an excellent tournament,” with AR Manoj adding, “The mood was awesome! Unfortunately, it rained heavily. So heavily for the first time in the last two years.”
However, others felt the game should have gone ahead, even if it meant playing the next day.
Anirban Ghosh said, “It’s been raining in the countryside in Oman for many long hours during the entire day. The International Hockey Federation should have anticipated and somehow rescheduled this. The bronze medal match played without hassles, whereas the gold medal match forfeited.”
“There should be a provision for an extra day if rain interrupts the game,” added Ayushman D. “The rules need to be changed. There should only be one winner.”
The trophy will now be shared between the two teams, with India keeping it for half the time, and Pakistan for the other.
“The final of the Fifth Hero Asian Champions Trophy Hockey Tournament at the Sultan Qaboos Sports Complex in Muscat, Oman was between Pakistan and India, the nations which have equally shared the four previous titles,” said a statement from the Pakistan Hockey Federation.
“So it was time to go one up. Pakistan was appearing in the fifth consecutive final and India had missed just once. It was all to play for. But the match couldn’t get underway due to the continuous downpour and the two teams were declared Joint Winners.”
In addition, a statement from Hockey India said, “The Indian Men’s Hockey Team will share the trophy of the Hero Asian Champions Trophy 2018 with Pakistan, after the Final of the tournament was forfeited due to adverse weather conditions on 28th October. India and Pakistan have been declared joint winners of the Hero Asian Champions Trophy 2018 due to the Final being forfeited.”
The Asian Hockey Federation, the governing body for the sport in Asia, also put out a statement about the final.
“In one of the most unpredictable nights in Muscat, the final has been called off between India and Pakistan due to severe rain,” said a statement from the Federation.“According to tournament officials, both sides have been declared Joint Champions of the Hero Asian Champions Trophy 2018.”
A statement from Hockey India said, “The final of the Hero Asian Champions Trophy 2018 between India and Pakistan has been forfeited due to bad weather conditions, stay tuned for further updates.
“India and Pakistan have been declared as joint winners of the Hero Asian Champions Trophy 2018 due to the final being forfeited,” added the statement.