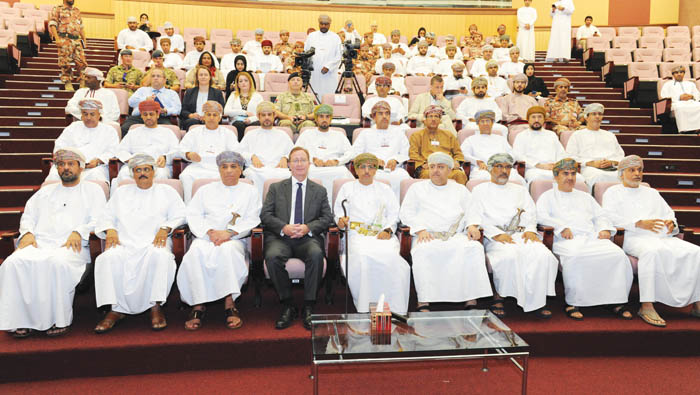 Muscat: The Sultan Armed Forces (SAF) Command, represented by the Moral Guidance yesterday organised the joint Omani-British press conference for the Swift Sword 3 Exercise.
The press conference was held under the auspices of Dr. Abdul Mon’em bin Mansoor Al Hassani, Minister of Information, Official Spokesman of the State for Al Shomoukh 2 and Swift Sword 3 Military Exercises.
On his occasion, Dr. Abdul Mon’em bin Mansoor Al Hassani, Minister of Information, Official Spokesman of the State for Al Shomoukh 2 and Swift Sword 3 Military Exercises issued a statement in which he said: “We are proud and deeply appreciate SAF for this coordination and harmony with the British forces taking part in this exercise. We are now approaching the last stage of the Swift Sword 3.
“As you are aware, all the aims behind Al Shomoukh 2 and Swift Sword 3 have been realised, as explained during this third press conference”.
Dr. Al Hassani added, “The good planning for such exercises will ensure achieving the prospective goals of Al Shomoukh 2 and Swift Sword 3 Military Exercises. An example of the good planning is having an official spokesman of the State and a military spokesman for the purpose of exercise”.
The press conference which was held at the Media Centre for the two exercises was attended by a number of their excellencies, senior officers, senior staff, local and foreign printed, audio, visual and e-media representatives.
From the British side, the press conference was attended by the British Ambassador to the Sultanate and British media men.
Brigadier Hassan bin Ali Al Mujaini, Head of Moral Guidance, Military Spokesman for Al Shomoukh 2 and Swift Sword 3 gave a briefing on the events of both exercises, as well as the outcomes till date.
He also explained the national objectives behind the two military exercises.
Air Commodore Maktoum bin Salim Al Mazrouie, Assistant Chief of Staff for Training and Joint Exercises started the press conference by saying that all the national aims behind the two exercises were successfully met.
He praised the unprecedented efficiency of the courageous soldiers, as well as their full punctuality and high professionalism in handling the real and hypothetical events of the exercises.
He noted that Al Shomoukh 2 and Swift Sword 3 were the biggest exercises ever organised in the history of SAF in terms of size and equipment used.
Royal British Forces
He affirmed that the participation of the friendly Royal British Forces at Swift Sword 3 has played a great role in enriching the operations and achieving the pre-agreed aims between the two sides.
“The two stages of the drill – the marine drill and the land-air drill with live munition will take place in the coming days in an environment that simulates the real battle operations,” he said.
On his part, Brigadier General Mark Peter Kenyon, Director of the Directorate of Military Development said that the participation of the Royal British Armed Forces with SAF and other military, security and civil organisations at the Swift Sword 3 reflects the deep-rooted historic and sustainable relations between the two friendly countries.
“Five years before, the UK has committed to take part at the biggest military exercise ever since 2001. The unprecedented deployment received admiration of the Omani and British sides.”
“The exercise implemented by the Omani and British forces has been successful in all aspects and reflects the long and strong historic relations between the two countries and their armed forces,” he added.
“The sophistication and events of the exercises, as well as the support provided by the Omani public organisations have been impressing,” he said.
On his part, Hamish Cowell, British Ambassador appointed to the Sultanate said, “I am very happy to hear about the great success of the exercise, which is the biggest ever by the British forces outside the borders since 17 years ago. The exercise reflects the strong relations between Oman and the UK, as well as our commitment to the security of the region”.
“I believe also that the British royal forces had a useful experience and benefited from operating in rough terrains,” he added.