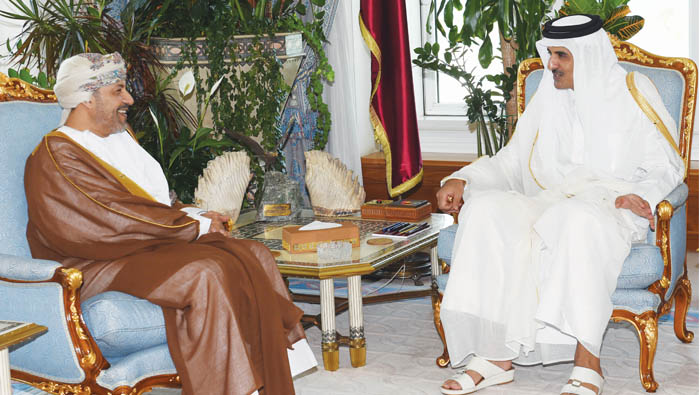 Doha: His Highness Sheikh Tamim bin Hamad Al Thani, Emir of Qatar received at his office in the Emiri Diwan yesterday Sayyid Hamoud bin Faisal Al Busaidi, Minister of Interior and his accompanying delegation, on the sidelines of his visit to attend the 12th International Exhibition of Internal Security and Civil Defence (Milipol Qatar 2018).
During the meeting, Sayyid Hamoud bin Faisal Al Busaidi conveyed greetings of His Majesty Sultan Qaboos bin Said along with best wishes of health and happiness to Sheikh Tamim bin Hamad Al Thani, Emir of Qatar, and the Qatari people further progress and prosperity.
Sheikh Tamim bin Hamad Al Thani asked the Minister of Interior to convey his wishes of good health and happiness to His Majesty the Sultan, and the Omani people further progress and growth.
The fraternal relations between the two brotherly countries, as well as ways of developing and enhancing them were reviewed during the meeting.
The meeting was attended by Sheikh Abdullah bin Nasser bin Khalifa Al Thani, Prime Minister, Minister of Interior of the State of Qatar.