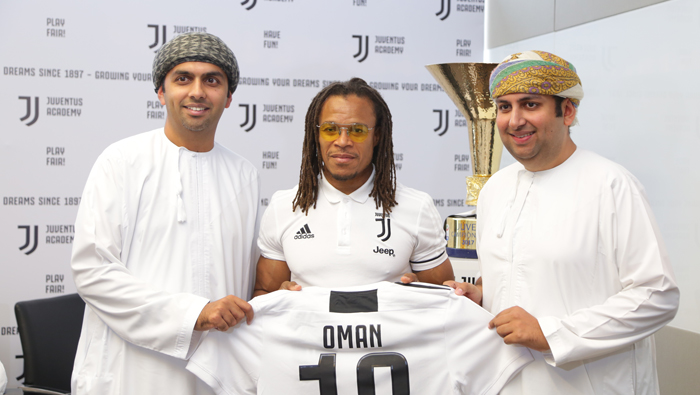 Muscat: Former Dutch footballing legend Edgar Davids is currently in Muscat on a two-day visit, where he has said that children in Oman who attend sports academies need to be taught more than just the sport they choose to pursue.

The ex-Juventus, Inter Milan, Barcelona, Tottenham and Ajax legend, who is here at the invitation of the Juventus Academy in Oman, spoke to Times of Oman on Monday morning.

“I think it’s important to coach kids at an early age, because I think it’s about more than [just] football,” said Davids.

“It is important to guide them. We already know that not everybody is going to be a professional football player, and we also know that they are going to grow up. It is important to be part of a positive social cycle,” he said.
**media[956060]**
Davids, who is considered one of the finest players of his generation, is a product of the famed Ajax youth academy in the Netherlands.

The footballer also said that quality education was more important than having several academies.

“I think it’s not just about having so many academies, it’s about having quality academies. [It is also about] handing children the tools to become adults and become positive role models for society,” said Davids.

Juventus, which in Latin means ‘youth’ has 11 academies for the development of youth in the MENA region, including Muscat, Abu Dhabi, Dubai, Manama and Kuwait City. Davids is in Oman as part of a tour of GCC academies, and spent Sunday afternoon with young players from Juventus Oman.

“Education must be at the core of any organisation for it to thrive,” added the former Netherlands midfielder. “For children today, it is important to not just play sports, but to train their minds, as well. That should be part of any philosophy. It is important to develop good role models for the benefit of society, and what academies like this do is help other people learn about different peoples and cultures.”

The 45-year-old Davids began his career at the age of 12, when he enrolled at the Ajax academy which has, in the past, produced players such as Edwin van der Sar, Wesley Sneijder, Jaap Stam and Marco van Basten, before his moving to AC Milan and then Juventus.

A spell at Barcelona followed, with his career also including time at Inter Milan, Tottenham Hotspur and Crystal Palace. He has won 15 trophies, including the UEFA Champions League, Dutch Eredivisie and Italian Serie A.