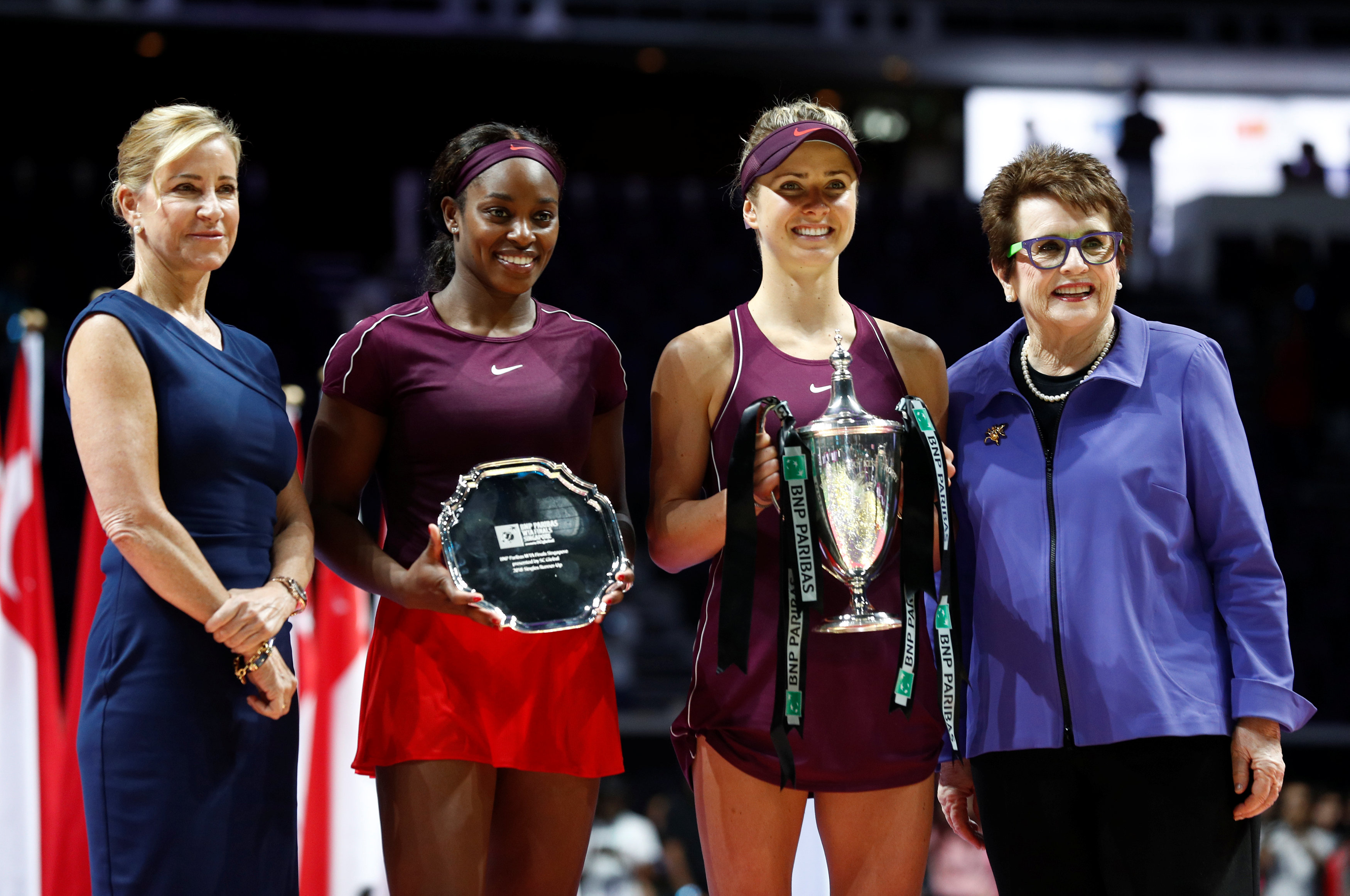 SINGAPORE: Elina Svitolina stretched every sinew in a brilliant display of defensive tennis to register the biggest win of her career when she rallied for a 3-6, 6-2, 6-2 triumph over Sloane Stephens in an enthralling WTA Finals title decider on Sunday.
Ukrainian Svitolina had arrived in Singapore woefully out of form, but the baseliner gathered momentum as the tournament progressed, winning all three pool matches and semi-final before subduing a fast-starting Stephens.
"This is a very special moment for me in my career and it will give me plenty of confidence for the season coming ahead, I am really pleased with my performance," Svitolina said as she received the Billie Jean King trophy.
Stephens, who looks deceptively casual but possesses supreme speed and athleticism, settled the quicker against a nervous-looking Svitolina, breaking at the first opportunity to lay down an early marker.
After a lacklustre start, however, Svitolina began warming to her task and found some range and depth to fashion two break-back points but Stephens' forehand was dialled in and she moved 3-0 ahead when the Ukrainian's backhand faltered.
Svitolina finally got on the scoreboard in the fourth game, able to placate the Stephens forehand with some brilliant defence, but the American continued to pound away at the corners to maintain her break advantage.
Untidy play
Counter-puncher Svitolina continued to plug away, holding another tight service game to stay alive in the opener, but Stephens sealed the set when her opponent could only find the net with a backhand from deep behind the baseline.
There was very little to choose between the players as the match proceeded and it was Svitolina's turn to make the initial breakthrough in the second set when she capitalised on untidy play from Stephens to edge a break ahead.
The Ukrainian was pumping her fist enthusiastically after every winning point as her opponent suddenly appeared lethargic, her energetic play rewarded with a third break of the set to send the contest into a decider.
The world number seven was dictating terms as a leaden-footed Stephens struggled to match Svitolina's relentless pace and once the Ukrainian moved 3-0 ahead after edging two epic games, the American could sense her chances were slipping away.
Stephens made one final effort to fight her way back into the match, but Svitolina kept the points long to force her opponent into unforced errors as she sought winners and wrapped up a memorable victory when Stephens skewed a backhand wide.
"I am super happy that I was able to finish off the season the way I did. Obviously, it was not the result I wanted but I worked really hard to get here, am proud of my play and really pleased with what I did this week," Stephens said.
Svitolina's triumph was her 13th victory in 15 finals and should fill her full of confidence as she looks to make a Grand Slam breakthrough in 2019.